Our first geocaching event - a May meander

As you dear faithful followers will know I have got into geocaching in quite a big way lately. So when we saw that the local monthly meeting was on home ground we decided we would go and join in with it. What better a way to learn how more experienced people do it? To get hints and tips and see how the more experienced cachers do it.

It was advertised as "A May meander". I found out the aim of these days is to go and find a cache celebrating a birthday, in this case a tenth birthday, it was ten years to the day since the cache was placed along the river. It was


A walk along part of the River Ayr Way. From Catrine to Stair. This section is roughly 8 miles long and will take us past Failford and the nearby Birthday cache..........Then set off at 2:30pm along the walk towards Stair for a lovely stroll. Roughly depending on pace I reckon this will take between 3 to 4 hours.


As a group we had decided to meet at the end point, so that some cars could be left there, we would then double up in cars to drive to the start point, and then once we were finished we would jump in the cars and get driven back to the start to pick cars back up.

So we met up, drove to the starting point, got introduced to the other members who had turned up for the day and set off on our walk.

There had been a dozen new cache added to the trail that went live at 9pm on the Thursday evening and this was going to add to the excitement for the experienced people. Would somebody have walked some or all of the trail before we started our walk and found them before us?


So off we set, across the bridge and keen to get going 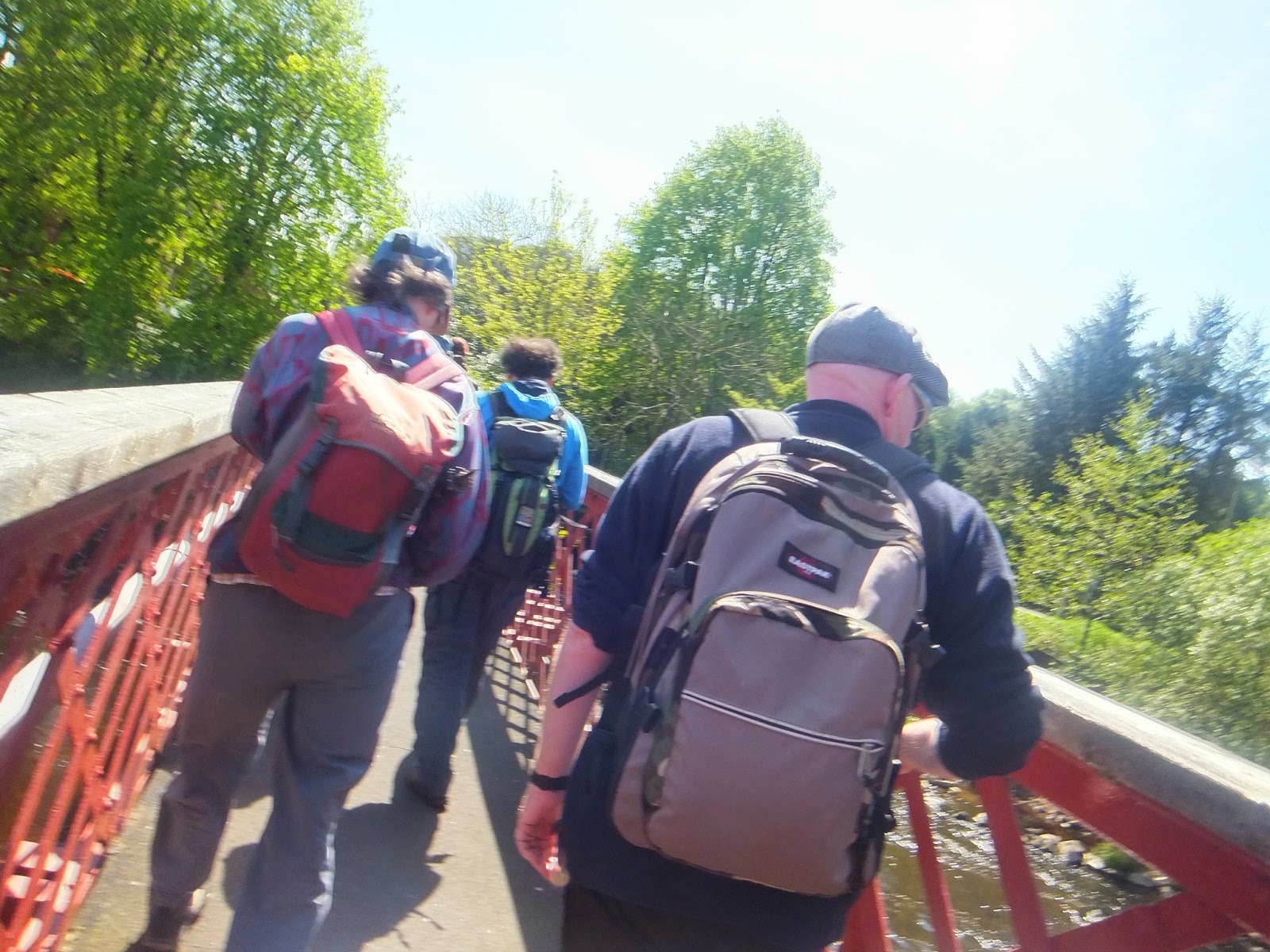 to our first find of the day 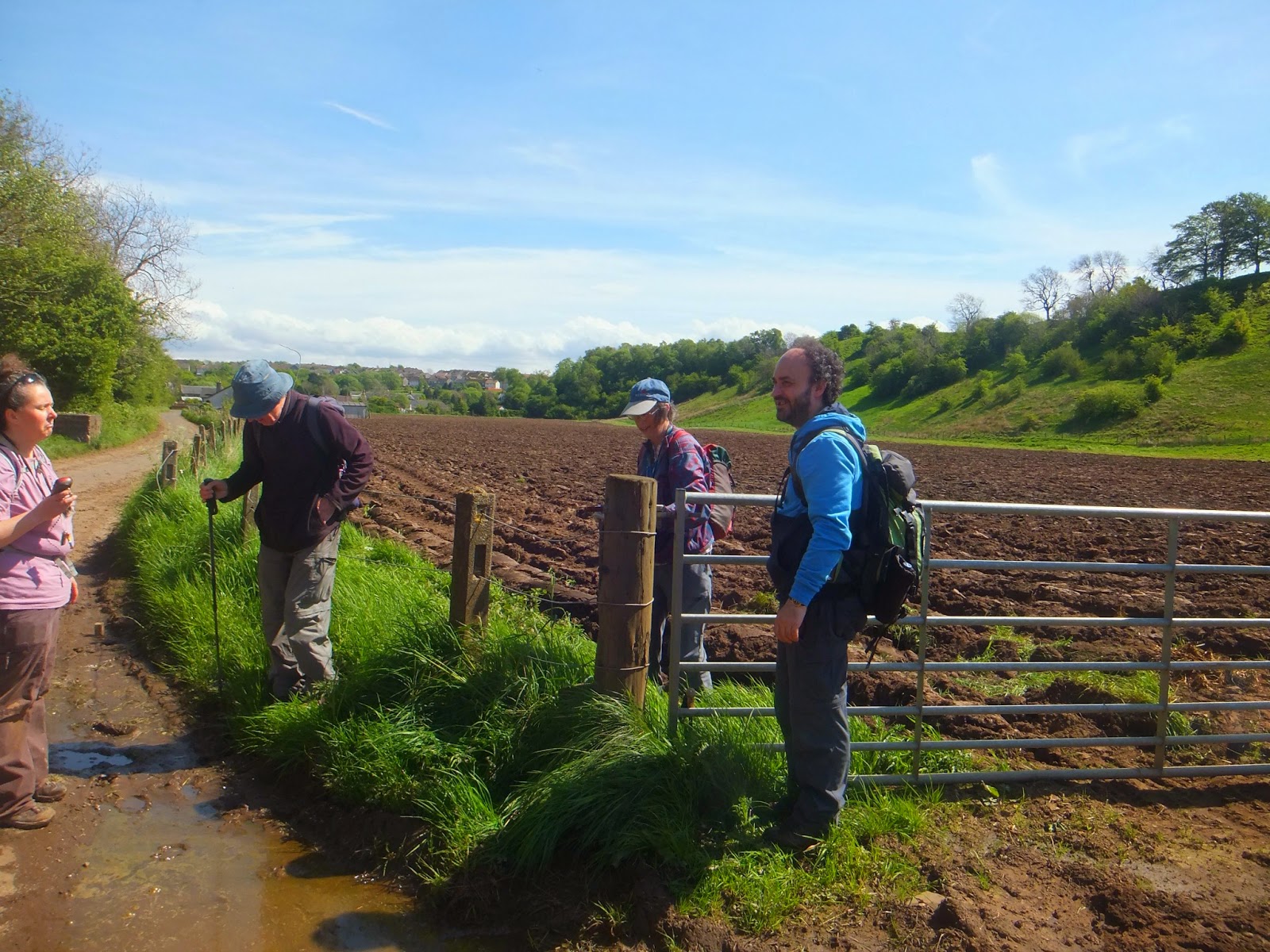 we walked along the river, well it was a river walk!! 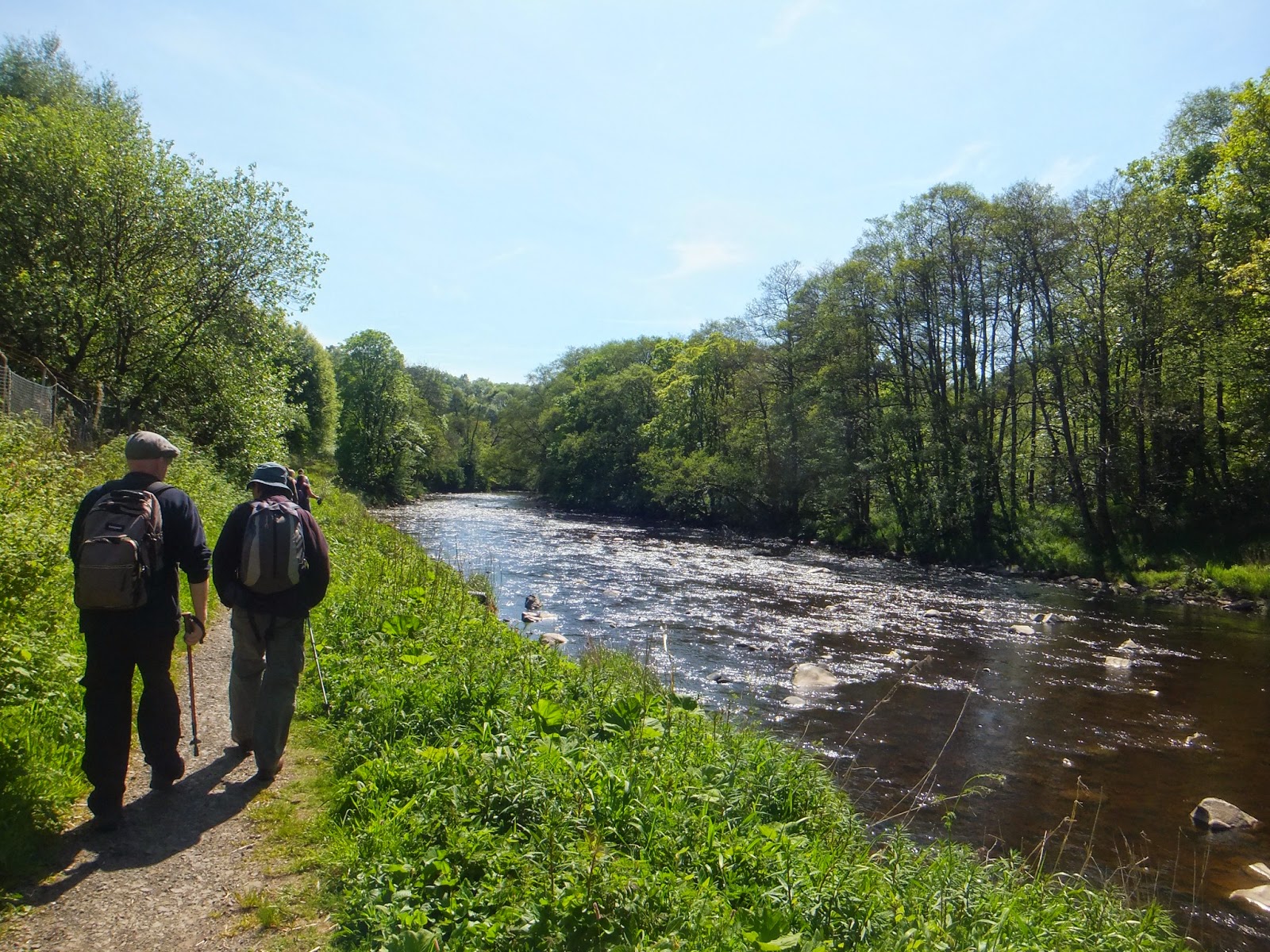 we puffed and panted upstairs 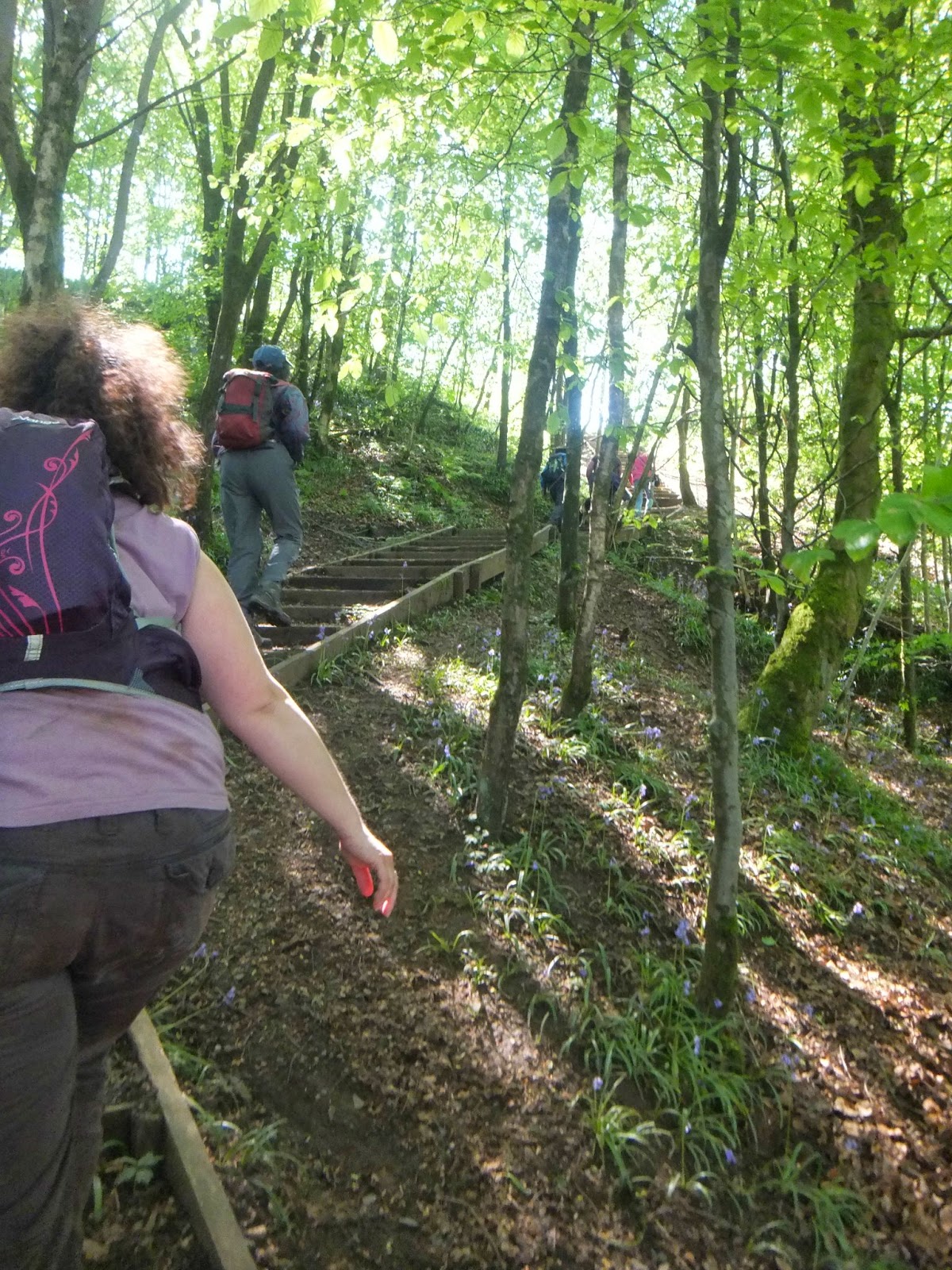 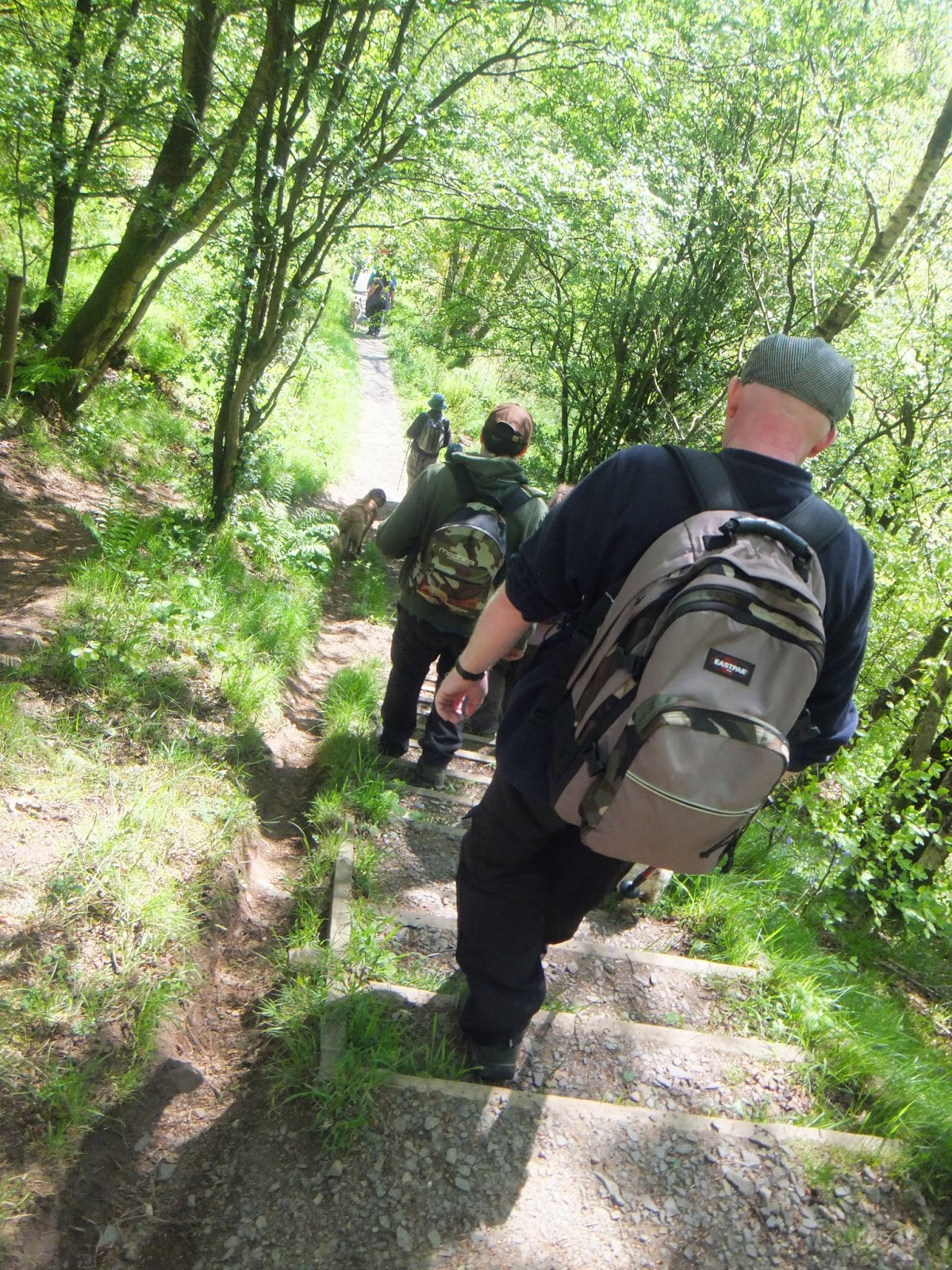 and found all the caches along the way, even the dogs helped in the hunt 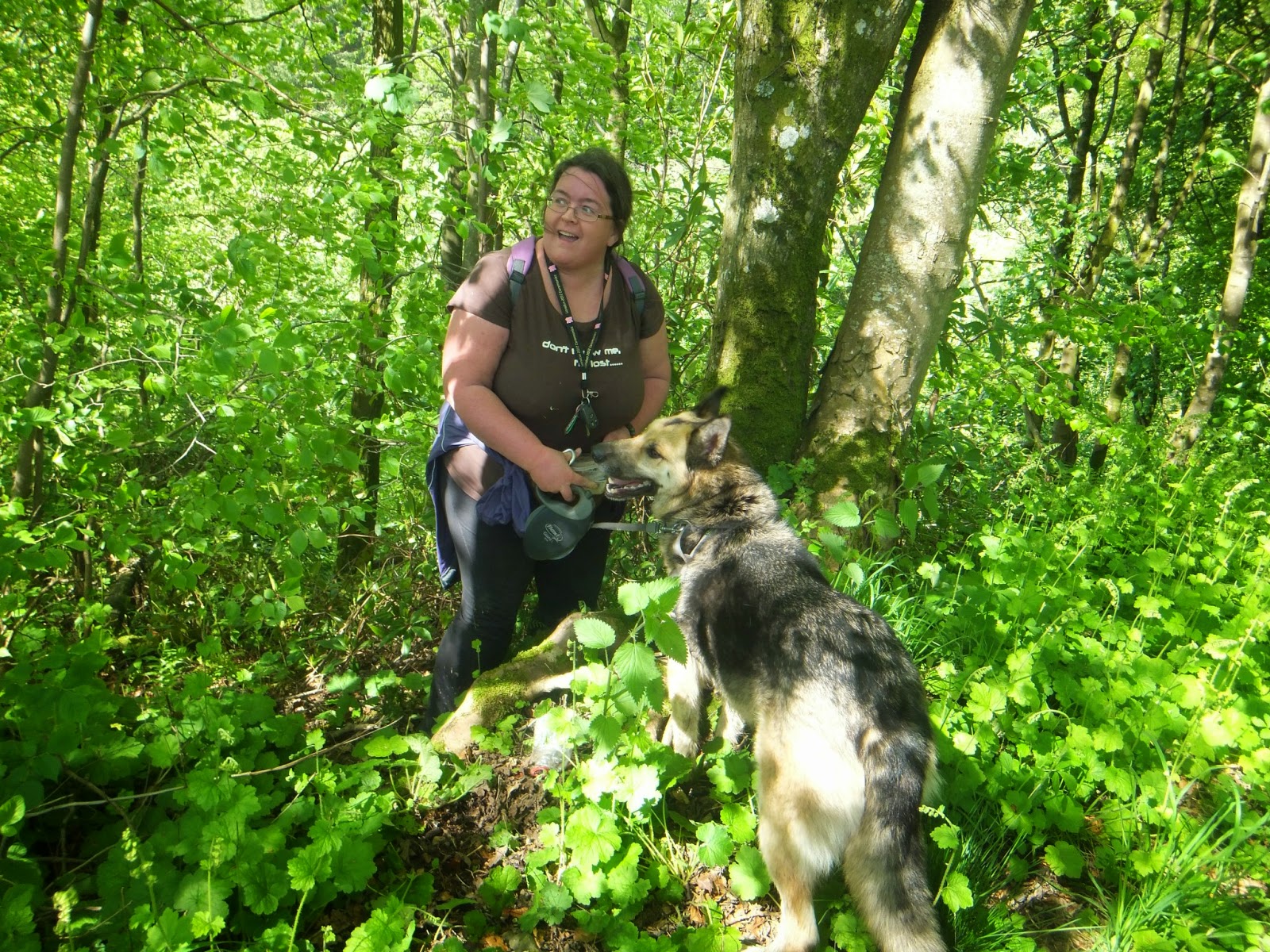 we went under the road 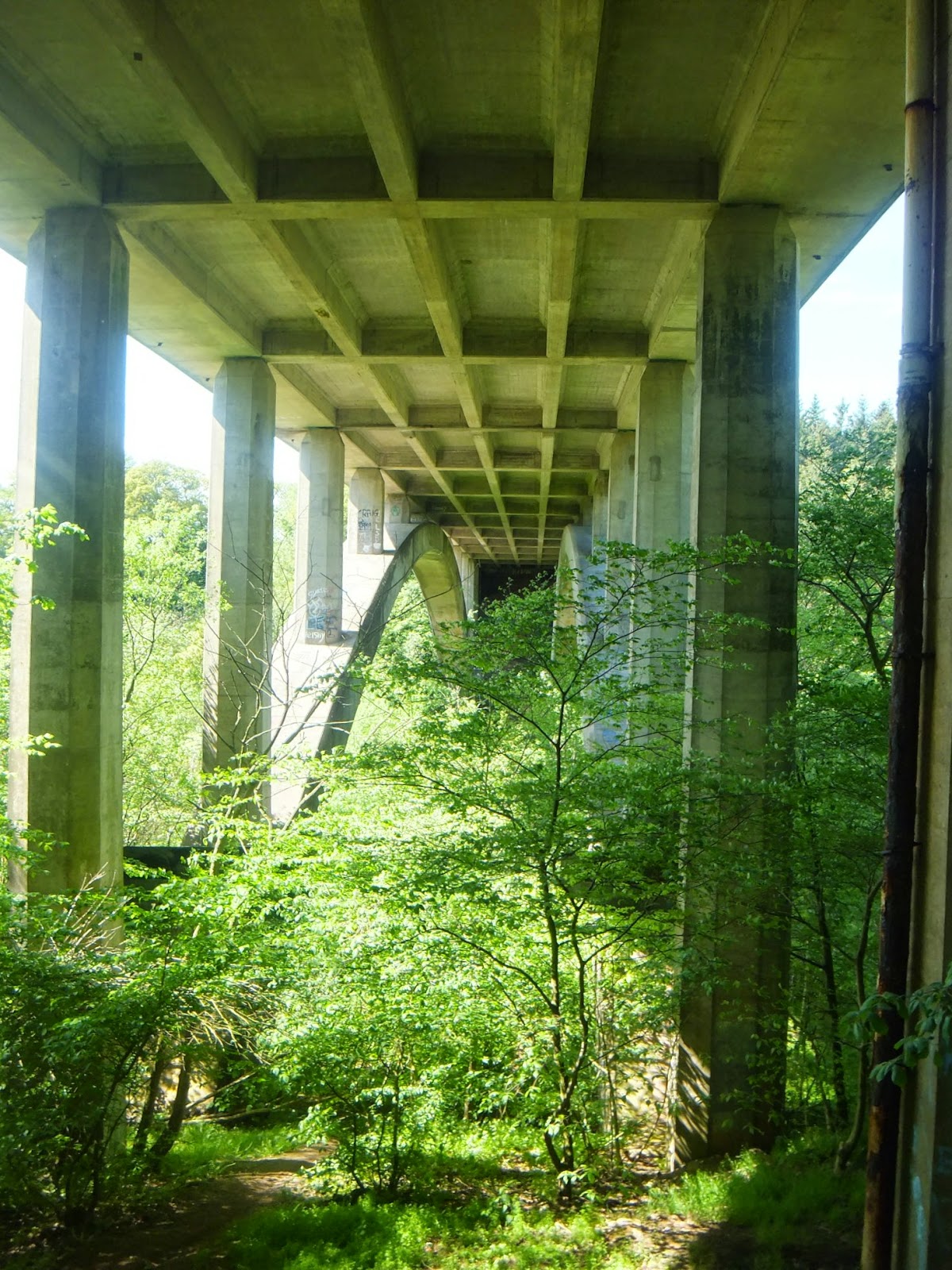 well that is the first mile and a bit covered. The chat was good, and the time passed quickly. 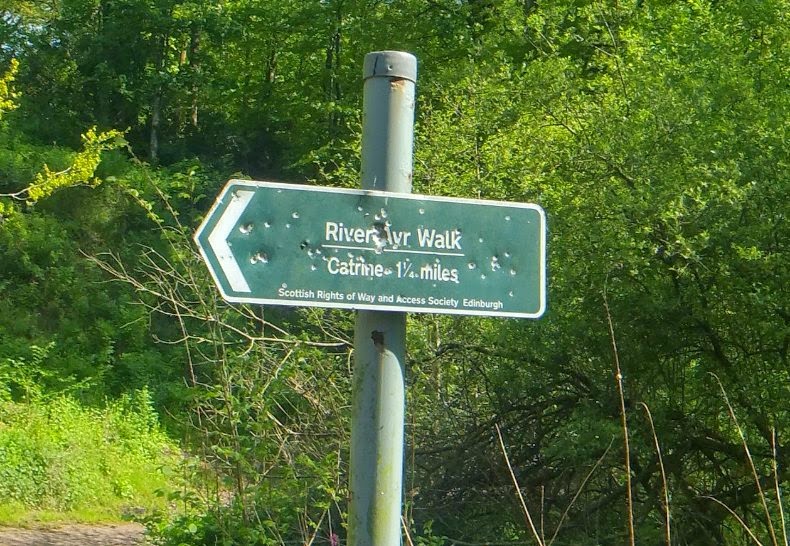 As we walked we admired the scenery 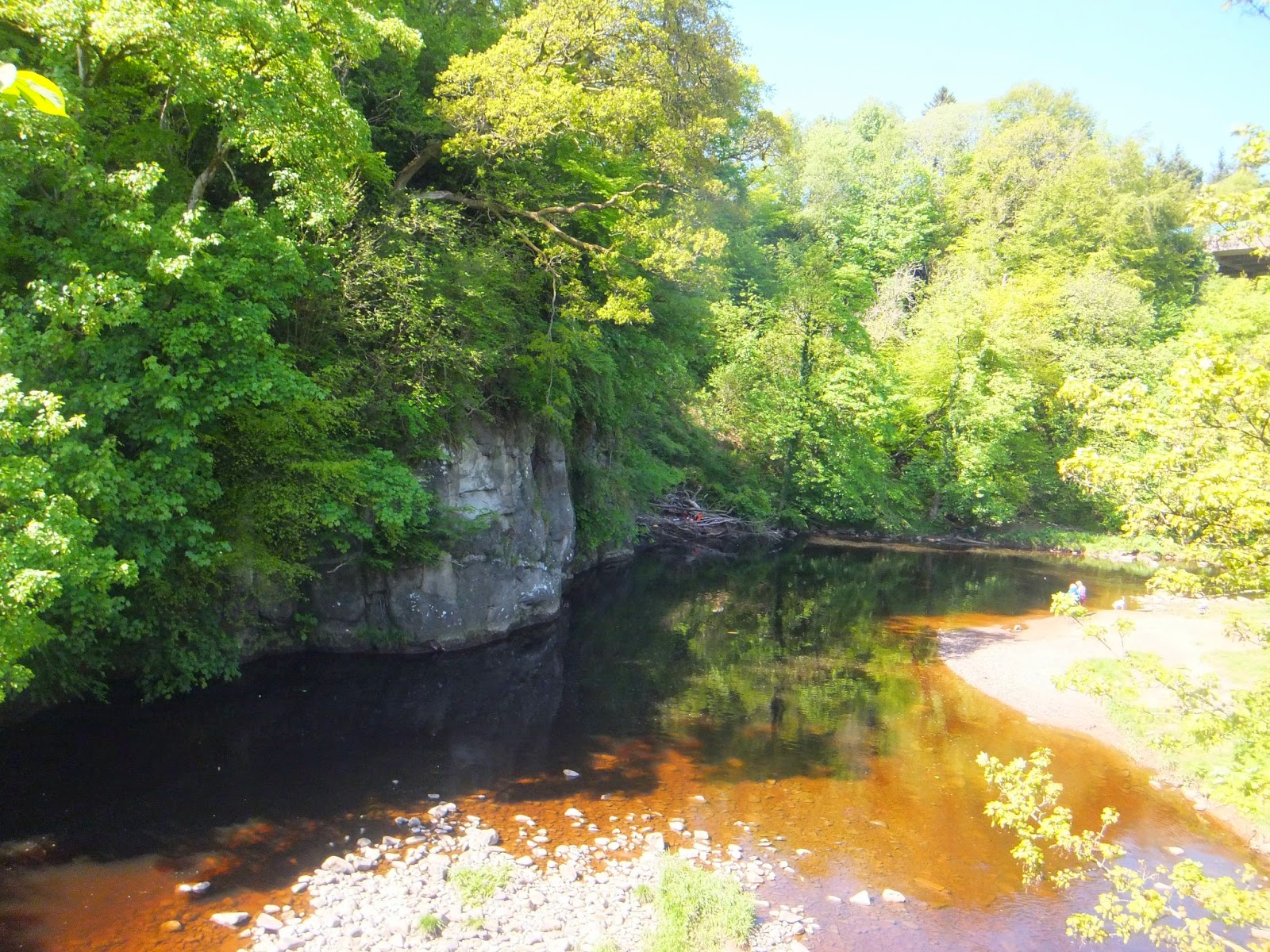 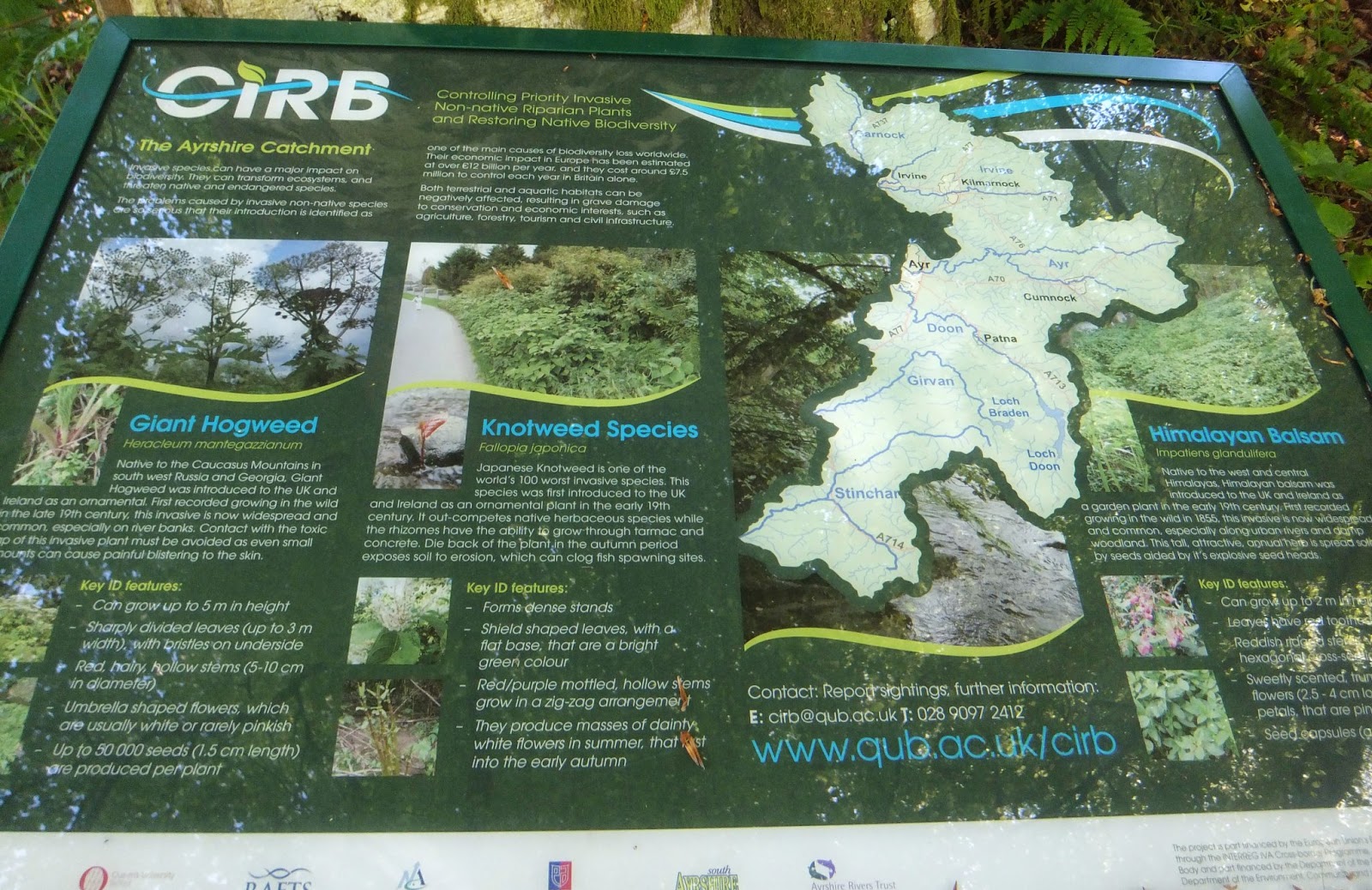 and looked at the strange 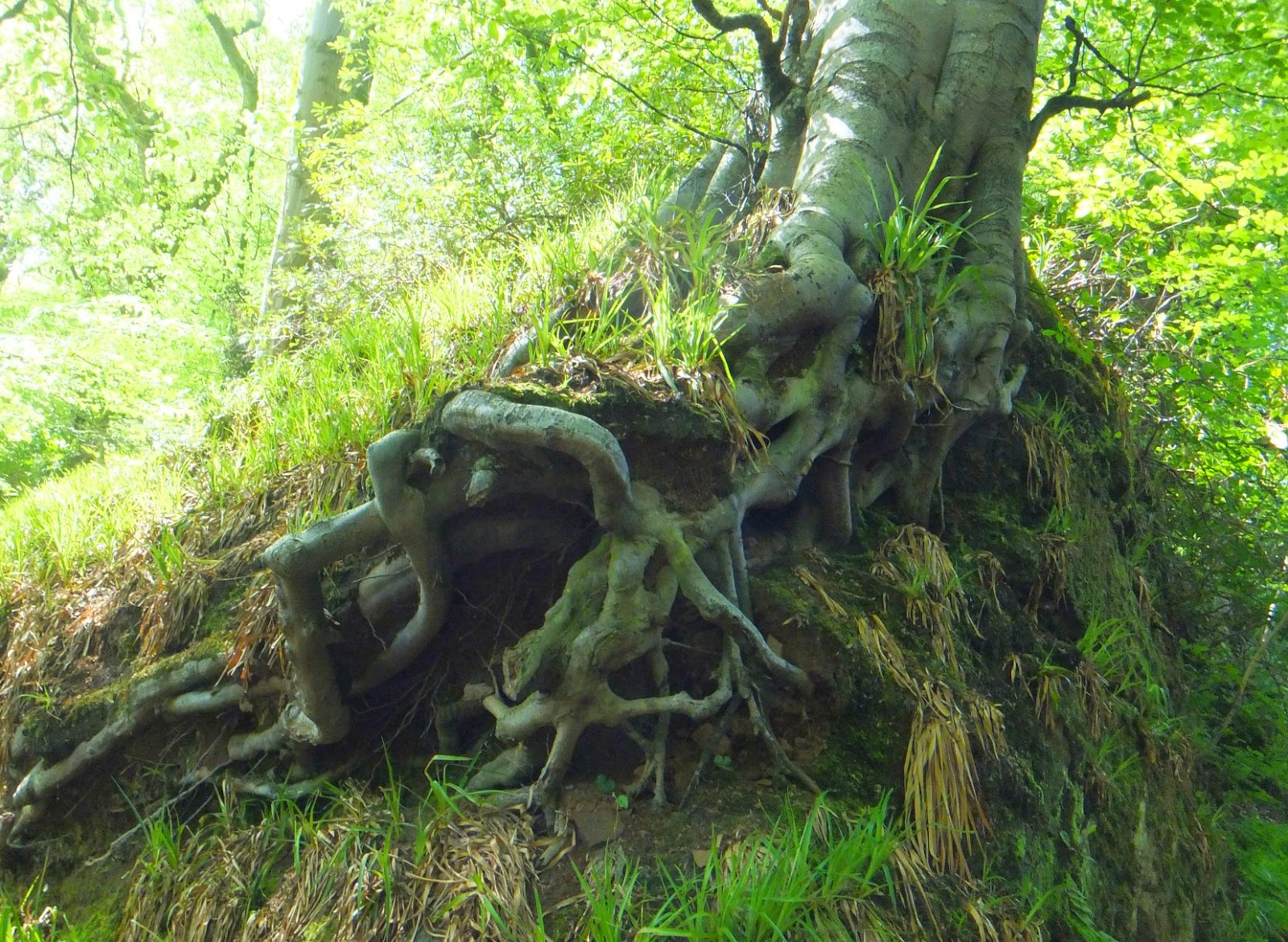 We found things that we had never seen before, interesting bits of history. These were quite difficult to get too, off the beaten track and you would never see them if you were not looking specifically for them. Some of the group who had either seen them before or were not interested waited on those of us who did want to see them and find the cache. It was times like this, and many others I realised why every body carried a walking stick, we need to buy two if we are carrying on with this as a hobby.

This cliff face site was rediscovered in the 1980's, and consists of an abundance of cup and ring markings and other more obscure symbols.
The site was obviously important to our distant ancestors, and as yet no real explanation has been forthcoming on the nature of the markings.
They probably date from the Neolithic period, although rock carvings in general are difficult to date without further archaeological evidence.
The carvings are very fragile and should not be touched.

These were very interesting, amazing that they are still these when you see the erosion on the sandstone around them.

From here we trailed onto another significant piece of history, The Ballochmyle Viaduct 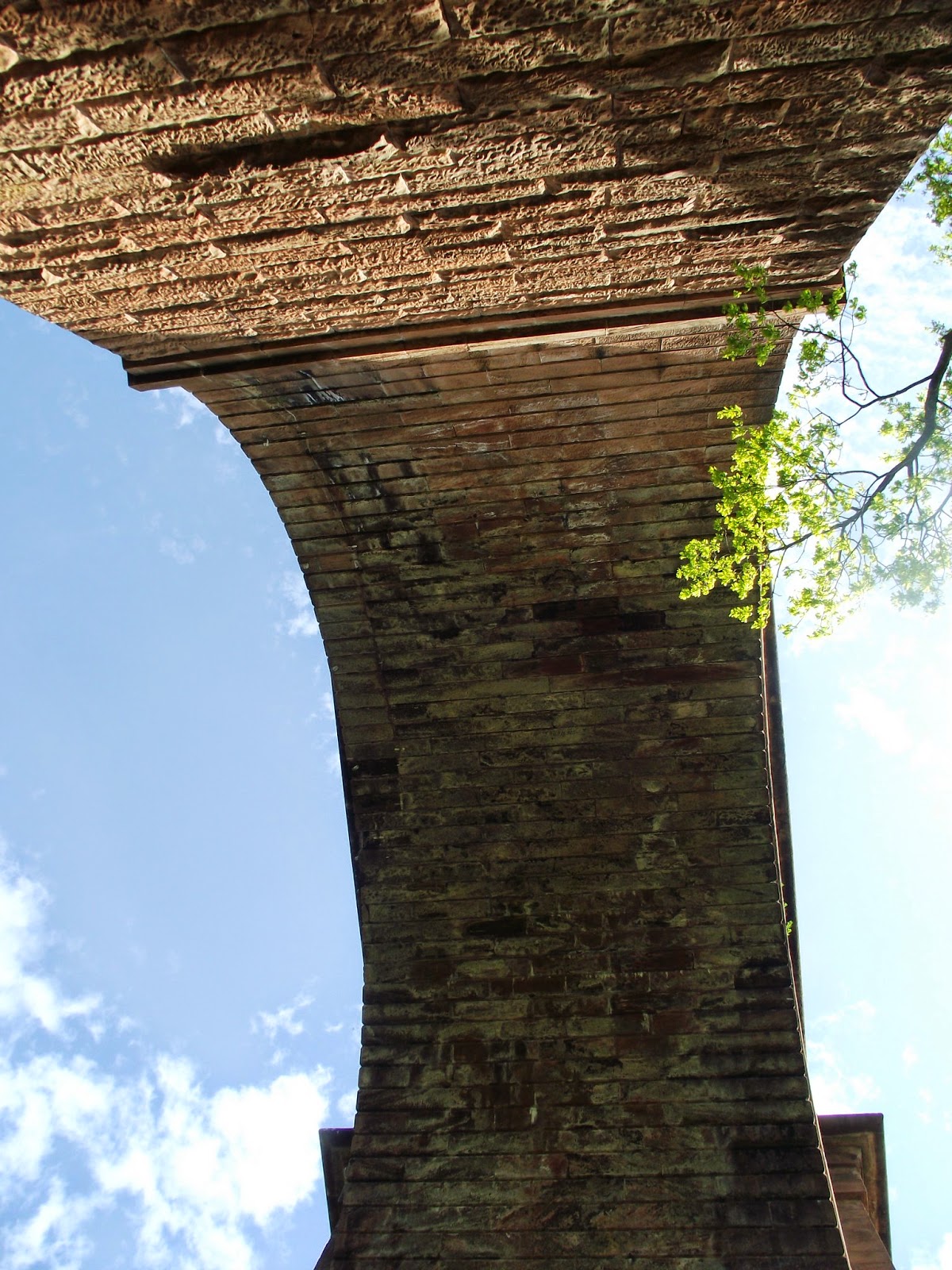 This superb structure carried the Glasgow & South Western Railway's main line from Carlisle to Glasgow via Dumfries & Kilmarnock over the River Ayr 1.6 km south of Mauchline.
With three 15.2 m (50 ft) spans on either side of a large central span of 55.2 m (181 ft) and 53.3 m (175 ft) high, this is not only the highest railway bridge in Britain, but it also has the largest masonry span in the world.
The stone bridge was begun in 1846 and was completed in less than two years (March 1848), but the railway itself was not completed until 1850. The stone was brought from Dundee.
It is a tribute to John Miller the engineer that it is still in operation and bearing weights and speeds never imagined when it was built.


The sgn gives you back ground information 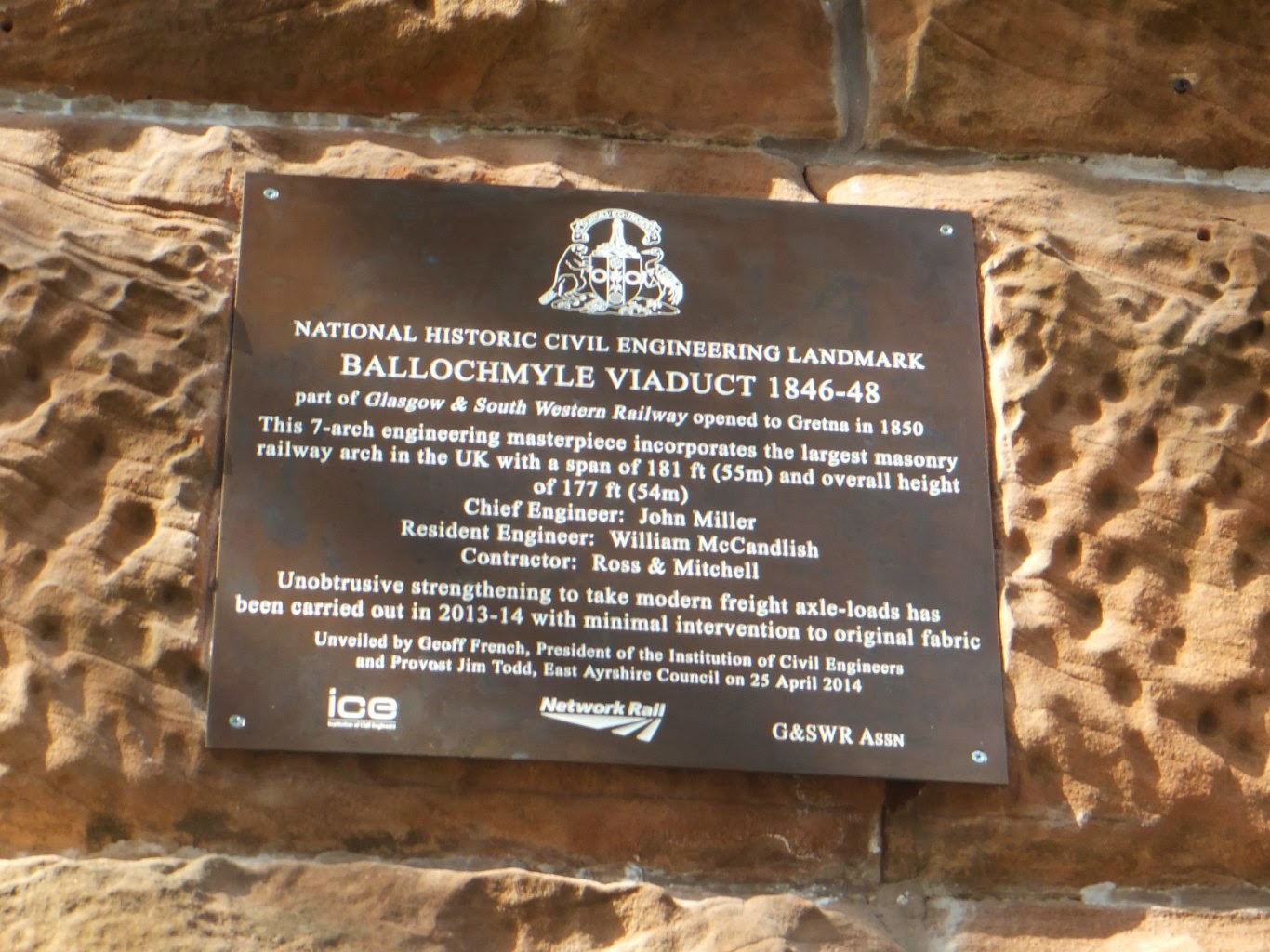 and it was a great place for a breather and a doughnut, kindly supplied by Chris who organised the event. Dont be fooled by the is pic, just off to my left ( I have on the red top) is a huge drop, not the sort of place you take children. 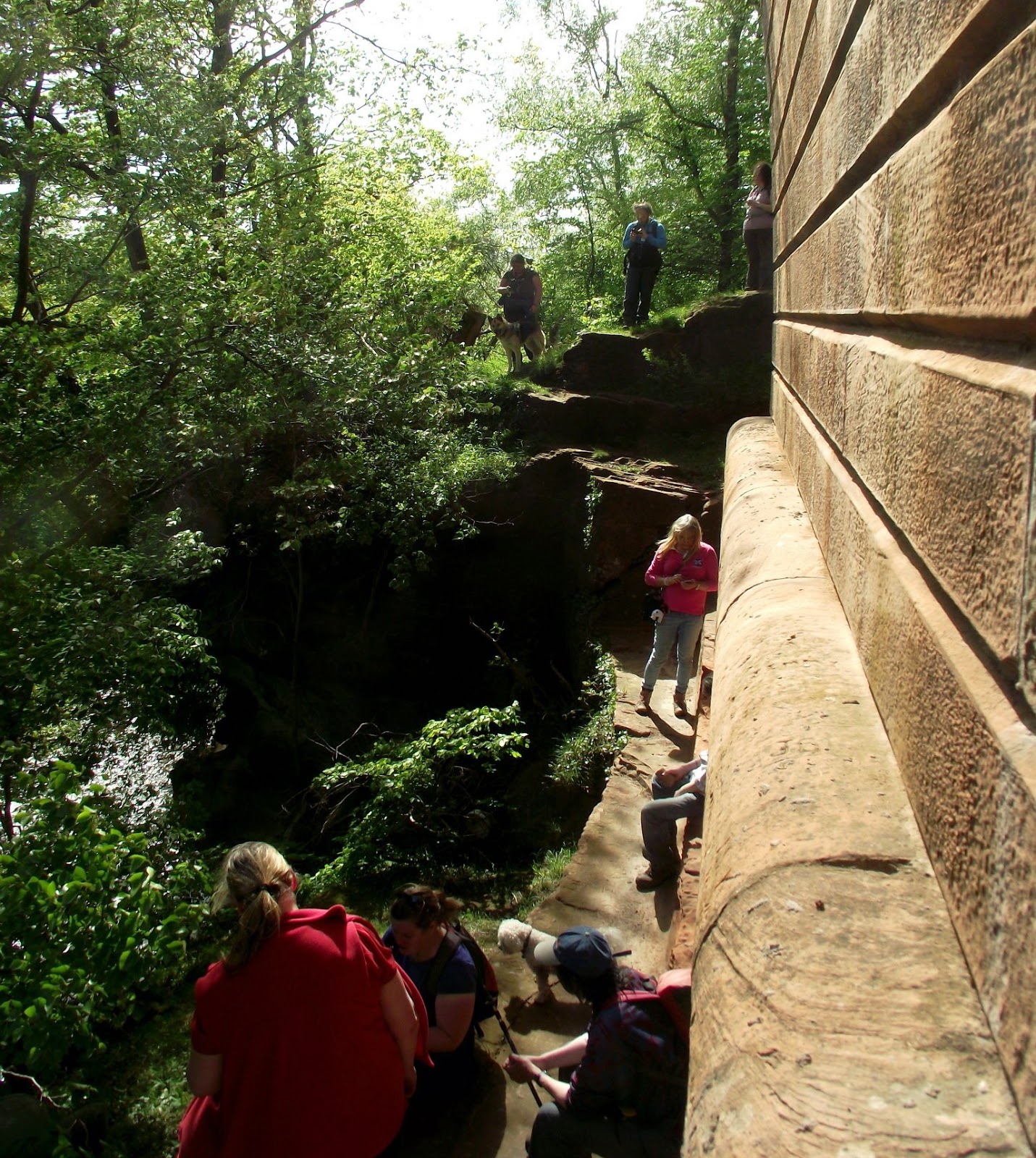 Its quite amazing what is on our own doorstep that we have never bothered to explore before now, shameful really.

We toddled on admiring more scenery and finding more caches, up more hills and down more steps, across slippy rocks and through mud, it was all good fun.

We then came to the end of the first part of the river walk. Past the farm and onto the road. We were approx 2 miles and 2 hours into the walk here. 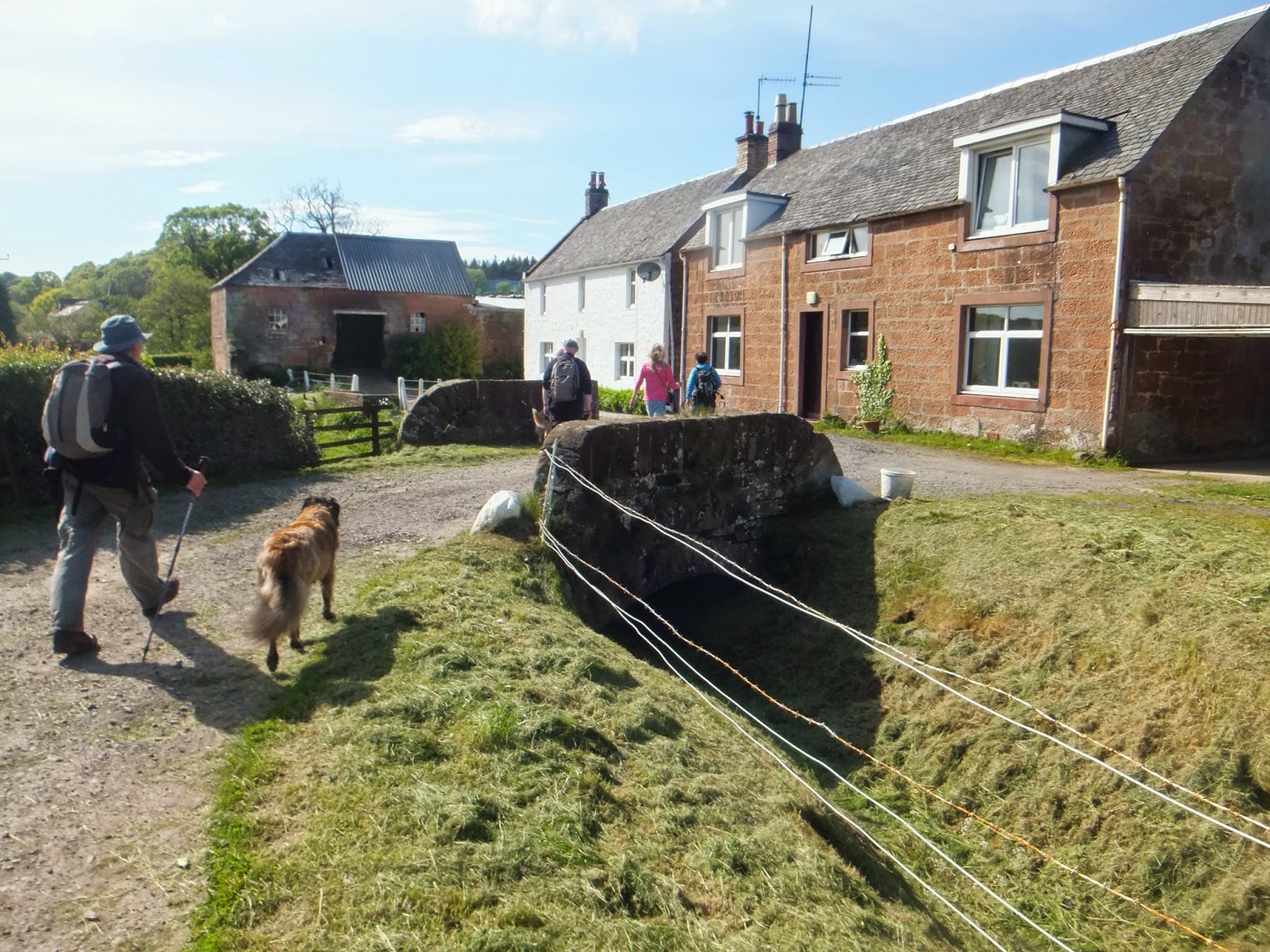 The next six miles was corralled across fields, well away from the river, with specific walk ways fenced off across farming land. This was where all the new caches were. 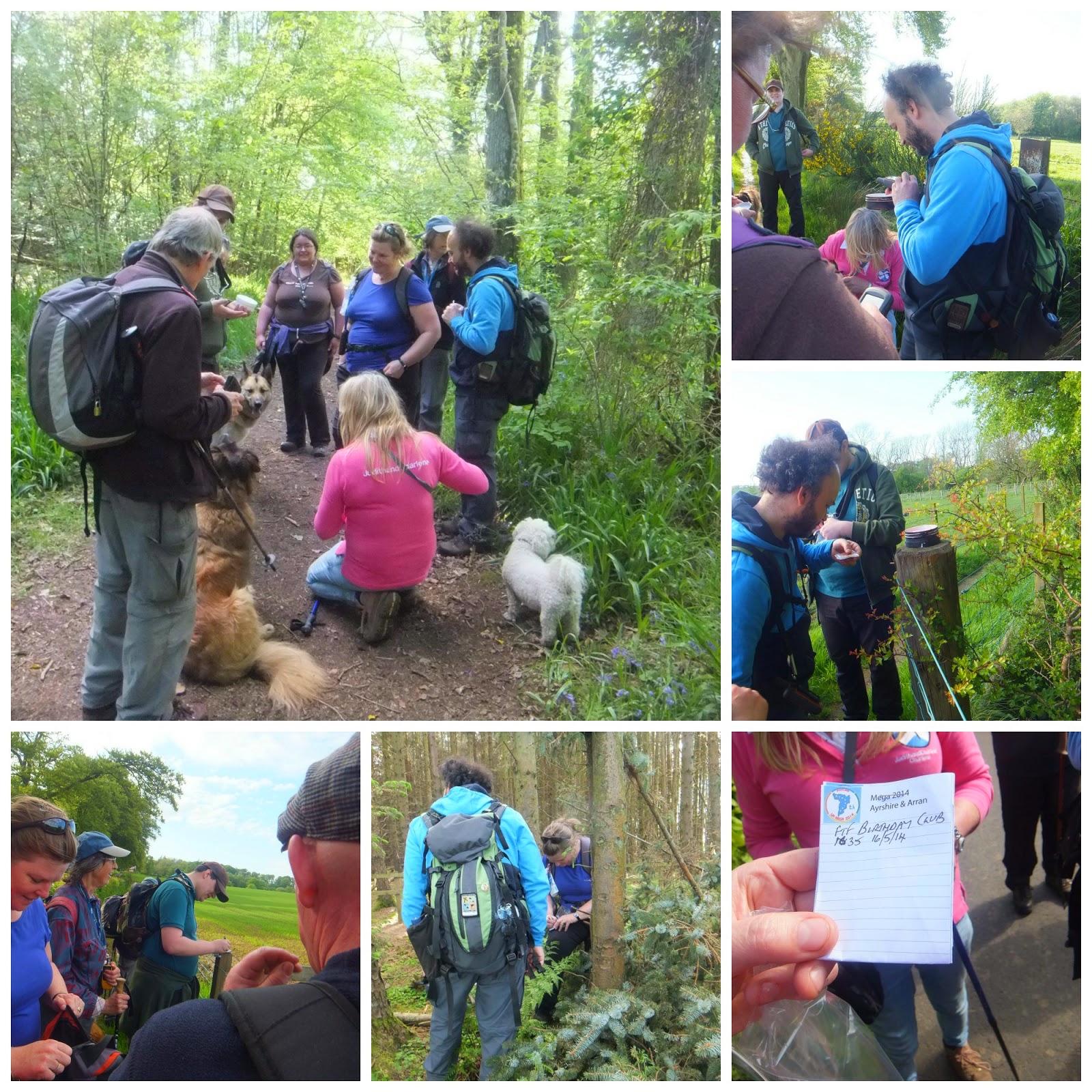 At this point we are diverted round onto the road, to head towards the village of Failford. There is a pub there that will give us all a comfort break, a breather and a much needed drink. 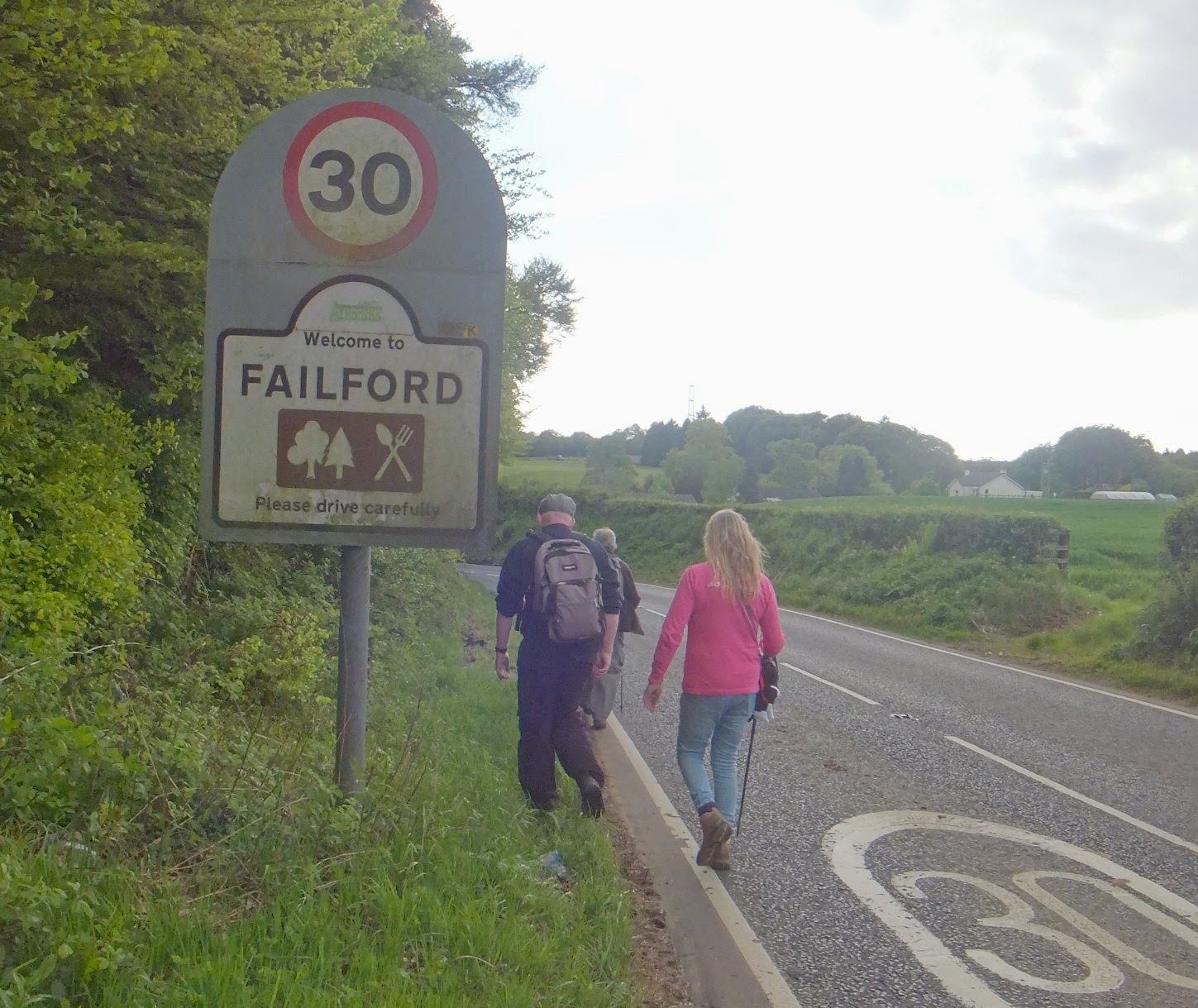 Have to say we have parked near here numerous times with the children, and it has never been open so was praying it would be.

Thank fully it was, and one of the staff was happy enough to take pictures with numerour cameras of the group. 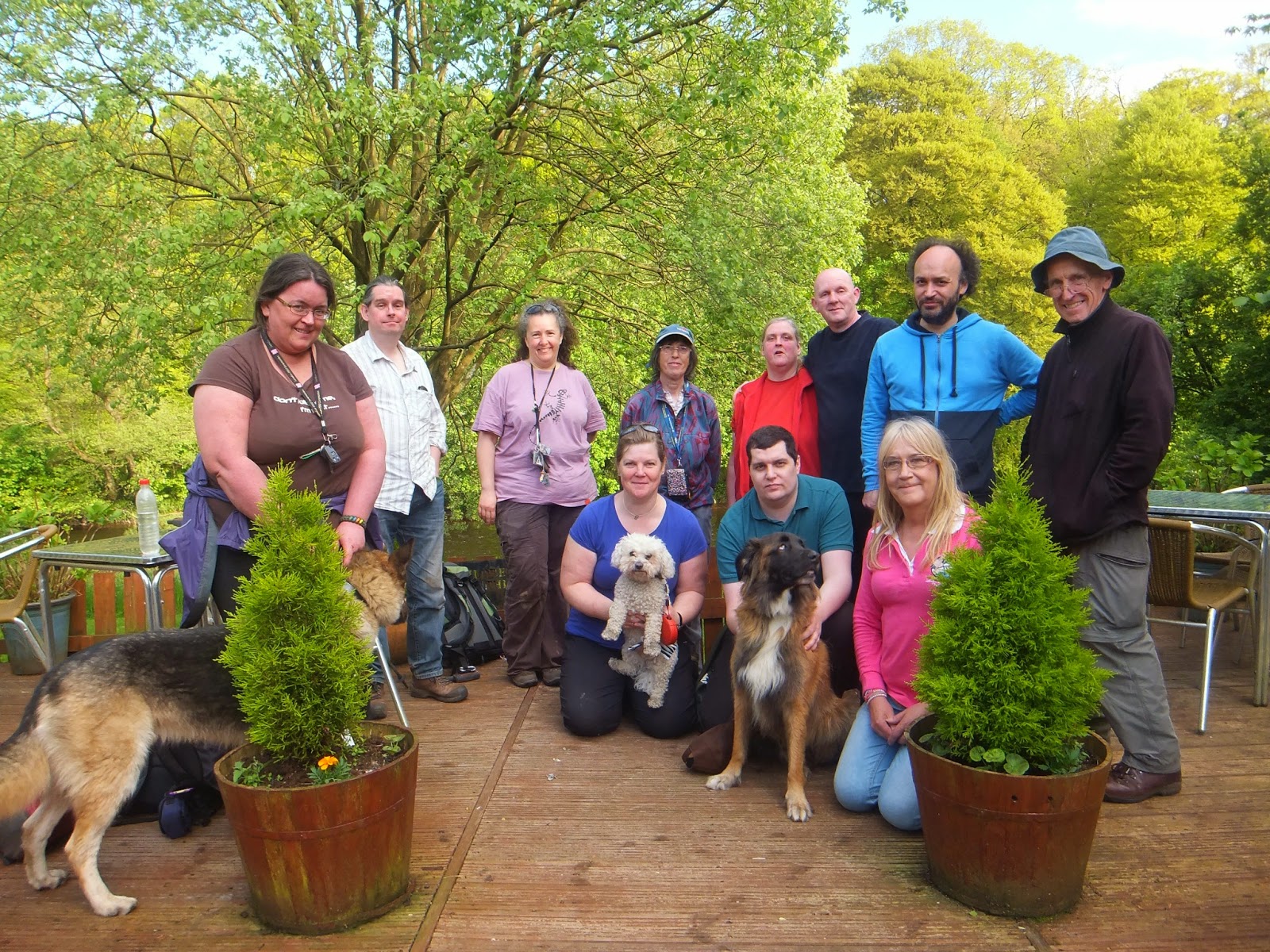 By now we were four hours and approx nine miles into our eight mile walk. I contemplated dropping out at this point, phoning my daughter to pick me up an take me for the car. But we were assured another mile or so, approx an hour would take us back to the car, so we decided we had come this way we may as well carry on.

At this point of the walk there is what is know as a multi, you gather coordinates that are made up by figures on landmarks to lead you to the final cache. Some of the group went up to the monument to gather the numbers needed, others had done it before and knew them.

From here we went along to Peden's cove, an area the children and I have been too for the next statistics. 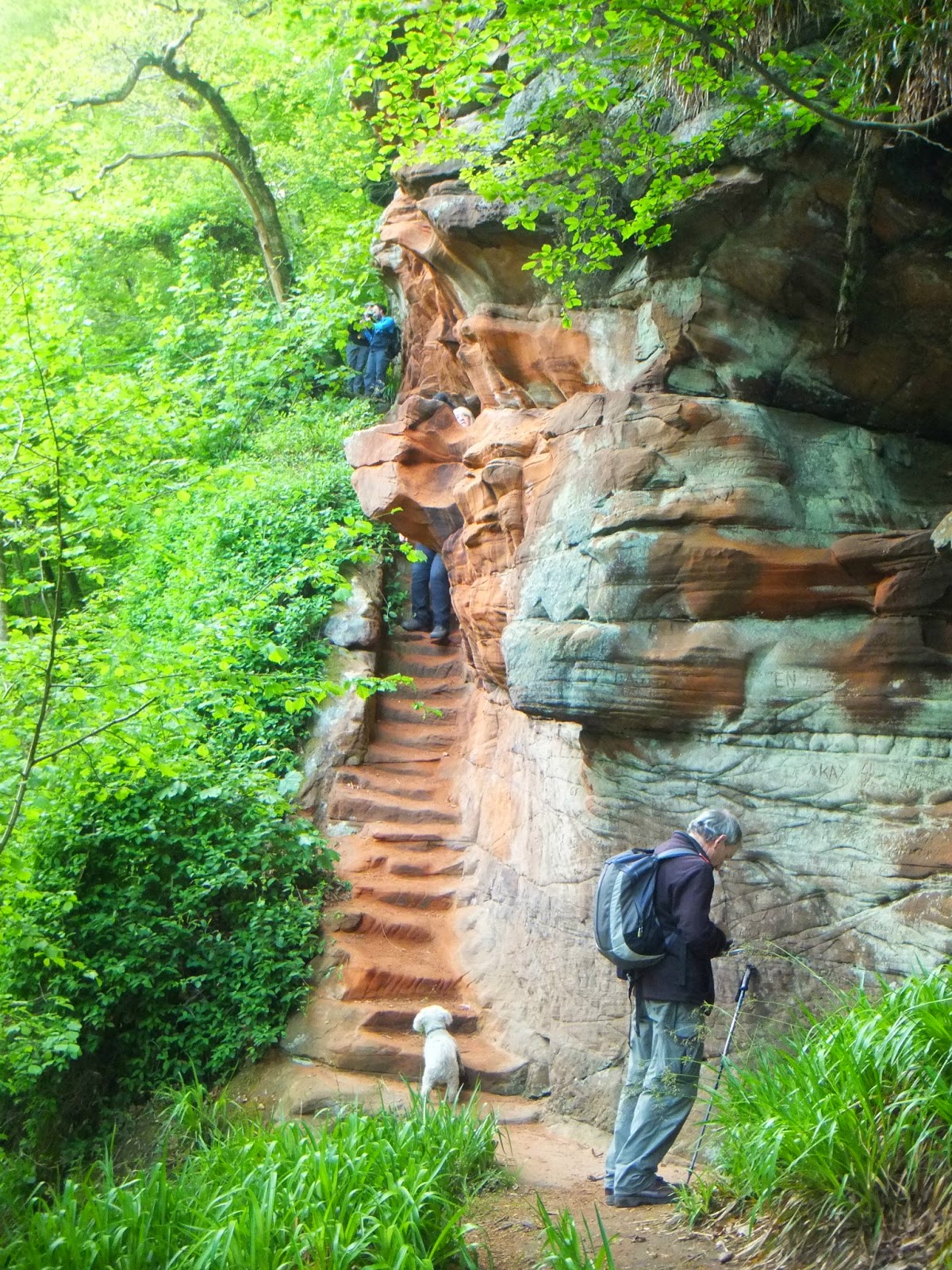 Once we had all the statistics we had a location. Between the eleven of us we hunted and hunted but could not find the cache, so it was decided after about twenty minutes that it was missing, and Chris replaced it with a new one. The last few log entries had been for "did not find". Sadly caches do go missing for what ever reason. 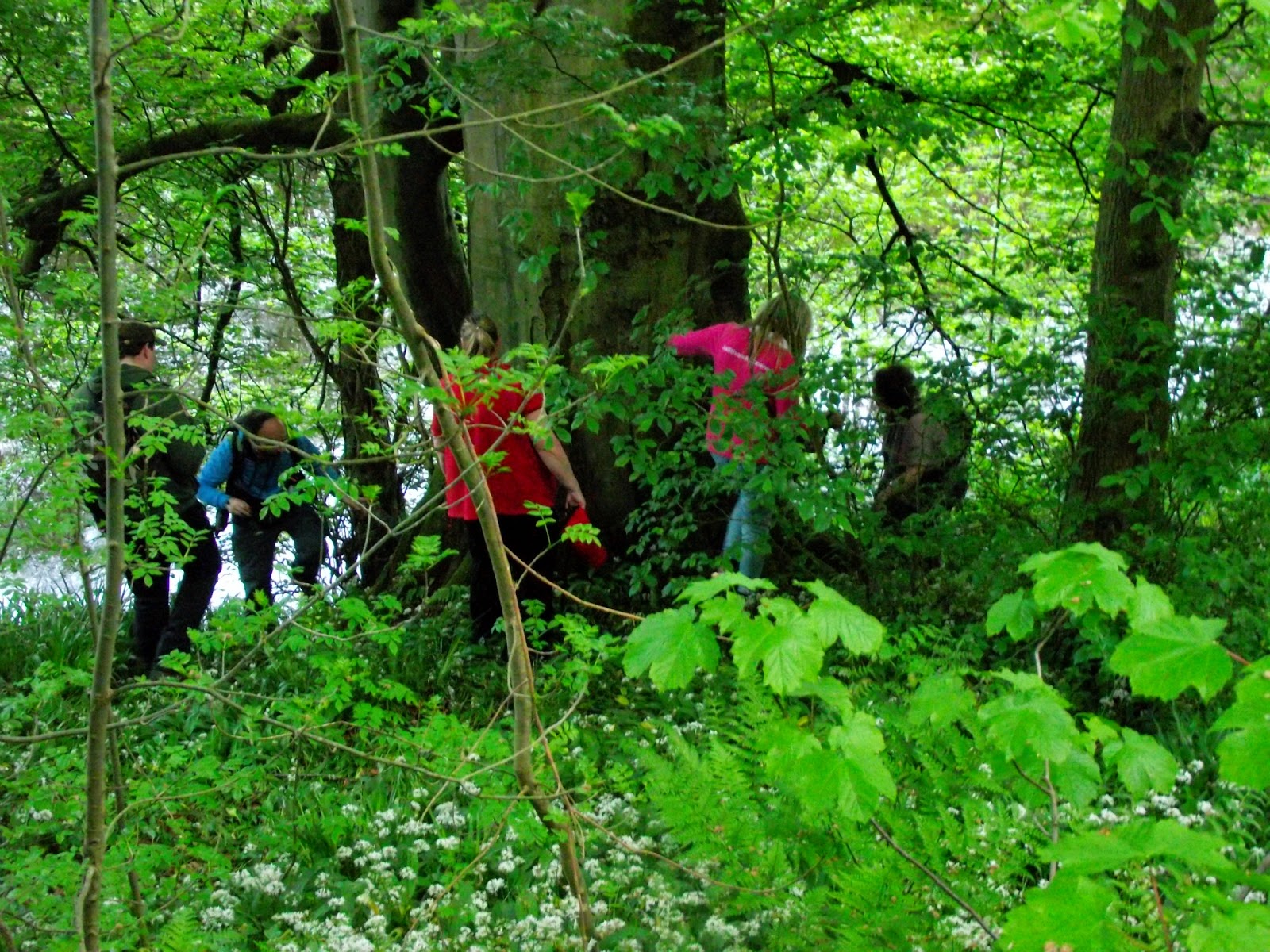 We carried on, and on, and on, by now two hours since we left the inn, I was beginning to wane.
We came across a diversion sign that stated there had been a landslide and that the path was difficult to pass and had posted a diversion for going round the road. Everybody made the decision as to which way they wanted to go and the group split up, some going via the road some of us trying the pathway. By this time I had lost all will to live, it was eight thirty, six hours and 12 miles into the walk.

We did get slowed down by a bridge collapse but we went across the fence. The wee dog that was with us needed help here to get across, but the bigger ones managed. 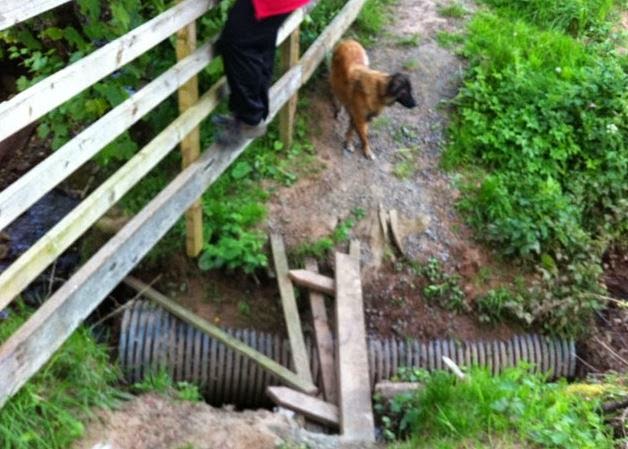 We also came across a very muddy landslide bit, that with due care and attention and assisting each other a bit we got past.

From here we got to the end of the trail, to the last new cache, the last to be found for the day. The second group that had split up joined us at this point, so for all their walk was longer, it was easier and just as quick. By now it was 9.30 pm, 7 hours and 13.5 miles had been covered. Hardly a meander but had been a good experience.

I added twenty caches to my total of finds, so a good day from that point of view.

Chris phoned a friend as we could not between us find the last cache, and so gave up. His friend phoned him back and a few of them went back to look for it, and did eventually find it.

My experience of the day was very interesting. It made me realise that for some of the cache the GPS's we all had with us were showing different distances away, and that some of them were being found up to 100 feet away from where they were shown. This apparently is normal, that sometimes who ever placed the cache may have been off with their location, and that it depends on which satellites your machine is picking up from.
Not all cache are easy to find, that even with a group of eleven we may need to search for twenty minutes to find it.
I also became more knowledgeable of likely hiding places, and learnt about different types of caches, as well as info like not all magnetic cache are placed on metal, but learn to look in a hole in the wood. Some are placed six foot high, others are disguised to fit in with their surroundings.

I also need to buy two good rucksacks so we can split the load when we are out together, that gloves are needed as we did have an injury in the group from not having a pair as nettles and other nasties grow at this time of year. A torch and tweezers are essentials, as are good quality footwear and a walking stick. So guess I need to go shopping.

Next months is a two hour outdoor meeting that will not involve as much walking, I look forward to it.