I ordered up a bottle of beetroot juice in with my parcel this month, as I had a notion to see if this recipe would work as well with the juice as with cooked mashed beetroots. 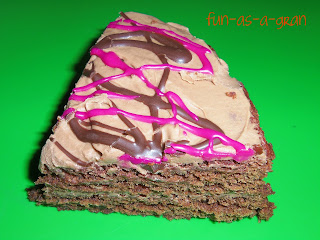 I have in the past made beetroot and chocolate cake and I love the stuff, so I thought I would adapt my tried and tested recipe and use this beetroot juice instead of beetroot, and see what sort of results I would get.

So first up I measured out 200g coconut sugar, 40 g drinking chocolate (for a richer chocolate you can use cocoa or carob powder) and 160g wholemeal flour (you can use gluten free and 1 teaspoon baking powder instead if you want a gluten free option)

Next melt 50g good quality dark chocolate (I used milk cooking chocolate as it was all I had, but it not quite as rich but works fine). 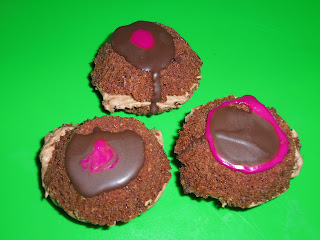 Stir the melted chocolate into the oil mix, and then slowly fold in the dry ingredients to get a sloppy mixture.

You can either cook this as small cakes, or make into a sponge.

You can sandwich the sponge together with a chocolate butter icing. I creamed 75g dairy free margarine, and then added 150g icing sugar and mix until totally combined. Melt 50g of a nice quality plain chocolate (or again cooking chocolate if you have none) and add 40g of it to the butter icing. Spread some on top of the sponge and/or the small cakes.

Drizzle the rest of the melted chocolate across the top. Make a small amount of icing using a few spoonfuls of icing sugar and a few drops of beetroot juice and drizzle across the cake as well.

My small cakes came out the oven with a top layer of charcoal oops I forgot about them, so I trimmed the tops off and creamed two together and then decorated them.

Cool in the fridge for an hour and then enjoy.

This cake is very much a brownie texture and is pleasantly different.

Next up I thought I would try my micro-nutrient cake with beetroot juice instead of tea or star anise as I have done previously. Same recipe but I made it gluten free so that E could get some, feel quite guilty taking stuff over for her mum to guinea pig without taking something that she can eat. 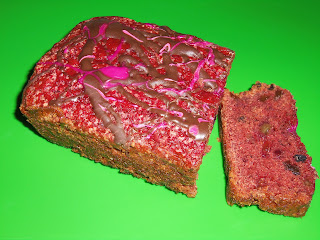 Once the cake was cooked and cooled I drizzled it with some chocolate and beetroot icing as above.

Also made some of this into small cakes for E and added her some chocolate butter icing and chocolate.

This cake I would say to eat on its own was a bit to "beetrooty", quite strong and earthy, an acquired tast. But it was lovely with custard and I also tried it with some dairy free cheese spread just to take the edge of the tang, and oh had a slice with butter and enjoyed it as well.