Having done a review on the brilliant new Dinosaur Train for nickjr a few weeks back,  which my daughter tells me many of her friends children are raving about and many parents she knows have it on sky+ and their children watch it over and over again.

I was fortunate enough to have been sent another dvd for the children to watch and talk about, and maybe these will become a big a hit as dinosaur train. The dvd this time has four different programmes on it, Dora the Explorers Easter adventure, all of us are familiar with Dora, but I will admit we have not watched this one as Fifi cannot stand Dora (sorry nickjr).

Math is everywhere, so every episode of Team Umizoomi is filled with everyday math problems that kids can solve with a little help from Milli, Geo, and Bot. Team Umizoomi was designed to help kids develop their skills with and to build their confidence in problem solving and important early-math concepts. 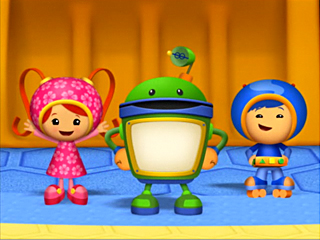 You can go and be interactive on their website as well.

The episode we were sent is the Easter episode called The Umi City Egg hunt which will air next month. The team have to help their friend April find her rainbow egg which tumbles into Rabbit Town.

I liked the mix of live with animation, and the interaction between them. Bob was happy to join in and was pointing out the correct shapes on the screen, though he did get one wrong when helping build the carrot, but thats what this programme is all about - learning. He was also counting with the programme and verbally enjoying it. It also had a train in so he was happy. It is a bright colourful programme that different young children will get different things from.

Fifi did not like this but it is not designed for her age group (nearly ten) and for her it was too much like Dora.

A race against time! Come and see what goes on behind the clock!

Inside an old clock shop is wall full of clocks. Big clocks, little clocks, silly clocks and sensible clocks. All of them ticking away to themselves and keeping perfect time. And right in the middle is one very special clock. This is the Tickety Toc Clock. As every hour passes, the Tic Toc Clock springs into life to chime in the time. It all happens as regular as clockwork!

But chiming the time isn’t as easy as it seems! For behind the face of the Tickety Toc Clock lies an extraordinary wooden world where things definitely don’t always run so smoothly. This slapstick show centres on our inseparable heroes, Tommy and Tallulah, and their remarkable friends as they race against time to keep the clock ticking. In this beautifully crafted series, the pressure is always on and every madcap minute counts! 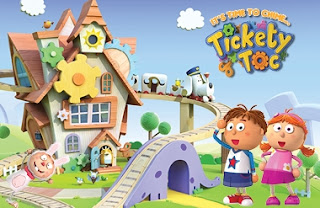 It sees the main characters interacting with others to solve a puzzle as a team, and again it features a train so you cannot go wrong with Bob. Bob could not really grasp the concept of it taking place inside a clock, but then you dont need to to watch it, Fifi was old enough to work out inside the clock was like the TARDIS, bigger on the inside than out.

It is a bright colourful programme with plenty of interactive participation for the young ones that even Fifi happily watched.

I feel this will be a big hit with the youngsters as was Dinosaur Train.
I was sent this disc as a thank you from Nickelodeon with no obligation to do a review.
Posted by fun as a gran at 08:24