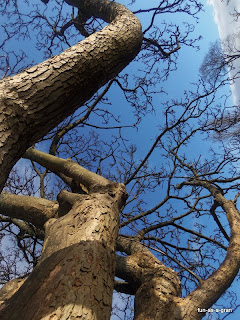 Loved the blue sky through the tangle of the trees, and as the sun was out I thought there may be hotspots, so I used heat map to get the second picture. 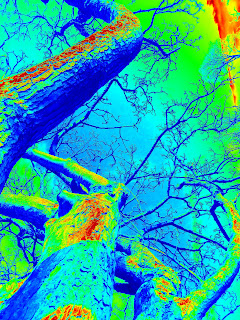 Now I did tell you this for me is all new. Was getting terribly muddles last night when trying to put photos on as Picasa told me I was full - full what was full?  how could I be full? didn't know you could fill up, didnt know there was a limit, but I had reached it. So I did some reading but now know that anything I add to my blog is stored online at Picasa - call me daft thought it was in blogger, but appears not, as you lot probably already know.

I learnt that I could not delete them from Picasa or they disappear from my blog, so have paid to upgrade the storage as did not want to start using another and uploading from there.

Now editing is limited in Picasa, but they take you to picnik to edit, which is closing shortly, but again google have taken over and I have discovered you get the same editing from google+  as you did with picnik if you go to albums, edit, so will be experimenting with that as well,

Have worked out how to watermark my pics as well this week, but for some strange reason doesnt seem to add it to all, and I would like the water mark slightly larger - so any hints and tips on that much appreciated.

Email ThisBlogThis!Share to TwitterShare to FacebookShare to Pinterest
Labels: 64/366, Project 366