Christmas is a time for giving, whether it’s presents, food, love or friendship, it’s certainly a magical time of year. It’s a time where we see communities and families come together to celebrate and embrace in the seasons good will.

Marks and Spencer’s knows that it’s not all about  the gifts you receive, but also what you give back and it doesn’t have to cost a fortune. We would therefore like to find out whether you would be interested in taking part in our ‘Spread Christmas Cheer’ campaign, now it’s the countdown to Christmas. We would like to offer you the opportunity to make someone else’s life better in your community this Christmas by providing you with a £20 M&S voucher to spend on a neighbour, friend, or local organisation to help spread Christmas Cheer.

You can be as creative as you want, such as baking some mince pies for the local homeless shelter or helping to decorate the local church.

Once you have used your voucher it would be lovely to find out how you used it to brighten up someone’s day and show that you don’t need a lot of money to make someone’s life better at Christmas.


So I put on my thinking cap to see if I could do justice to this offer. I could think of two age groups of people that this could make a difference too, pensioners or children. So I thought the easiest way to tap into these people was by speaking to somebody who works in the local community, so I went and spoke to Richard, our village pharmacist. I explained to Richard about my blog and about the challenge, I told him I did not need to know who he was thinking off, confidentiality needs to be respected. I then gave him a few days to think about who would benefit most from this, and he chose a pensioner, somebody he knows this would cheer up and really make a difference to.

So on Tuesday as we were going into town to see Santa then we decided to do our shop at the same time.
My husband and I did some thinking on what we would buy, and I spoke to some senior friends I have before we decided on what would be best. We discussed smellies, hat and scarf set, a piece of clothing, or food. Food won the discussion.

So first off all we looked for a few luxury items, these we covered with a nice decorative tin of shortbread and a pack of Belgian flaked truffles. I added to the Christmas cheer with some all butter mince pies. 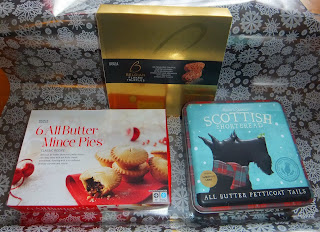 We then decided to look at a few more basic items, items that we were hoping they would like. We avoided fresh items so we did not need to worry about keeping them refrigerated. First off we went for very basic -  a box of teabags a jar of marmalade and two small tins of beans. 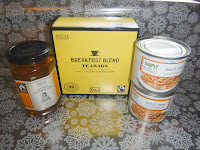 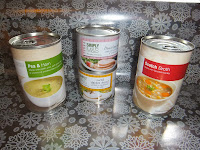 Next we added what we thought they could use for a few meals, a nice tin of Danish lean ham and a tin of cured chicken breasts that we thought might be nice in either a sandwich or maybe with potatoes and the beans for a meal.

To finish off the spending we decided on two tins of soup one scotch broth, just cos its my favourite and a pea and ham as it is a popular product that most people like.


We bought some nice wrapping paper and carefully wrapped it round a box to make a pretty hamper. We also added a Christmas card to wish the person a Happy Christmas. 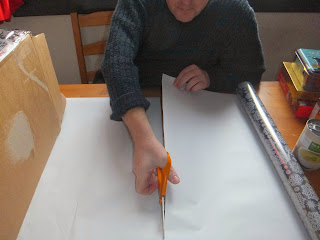 I enjoyed doing this project, and I hope my recipient gets a much pleasure out of their nice surprise as we did in putting it together. 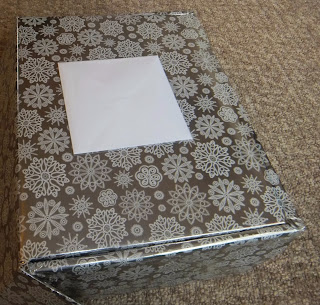 Once it was wrapped I took it along to Richard at the pharmacy and handed it over. Any excuse to get my personalised t-shirt a wearing in public!! 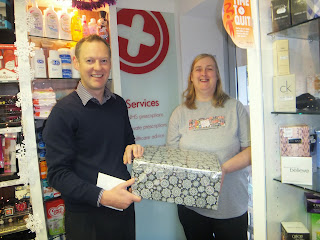 Thanks Richard for aiding me in doing this challenge.

Dislclaimer- I was supplied with the voucher but apart from great satisfaction I did not receive anything.
Posted by fun as a gran at 13:10