This is a sponsored post, but with my thoughts and findings given honestly to enable you to try the products for yourself.

I was sent a litre of Kara coconut milk ( and why is every time I type coconut I type it wrong, missing out the 2nd o?) last week as part of my parcel from Healthy Supplies , so as I was due to make yoghurt and I always wanted to try coconut I thought I may as well try it.

Unfortunately it didn't work as was still like separated milk this morning, I have now done further research and found that the UHT coconut milk is not suitable it needs to be the tinned stuff, though I must admit last night I had my suspicions as any other milks I have tried that have not worked do not produce a skin on top of the milk when heated before cooling, but we carried on regardless.

So this morning being presented with a litre of milk I thought about what we could make with it, so decided on coconut pancakes and strawberry mousse.

The strawberry mousses was a simple thing to make, just heated a pint of the milk slightly, dissolved a strawberry jelly into it, left it to cool, when nearly set whisked it in the food processor and placed in fridge to set. Verdict - light airy and very refreshing, could not taste the coconut flavour at all, probably overpowered by the strawberry jelly. But later on in the evening I could taste the coconut as I found it came back on me for a while, but that probably just me.

The pancakes we used our yummy pancakes from here, substituting the self raising flour for Coconut flour and the vanilla rice dreams milk for coconut milk.  Fifi could smell the coconut from the flour but not so noticeably the milk.


Verdict - a nice mild taste of coconut, but a wet doughy innard to them, not unpleasant, but was aware of the gritty texture of the coconut flour.


Not so sure I would make them again but pleasant enough and made a change.


The mousse I would make again as a pleasant summery treat.


The pancakes served up with the mousse and peaches 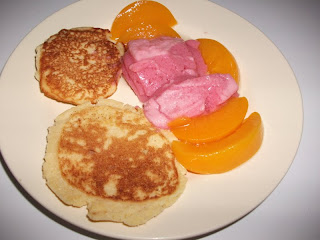 So for all the coconut milk did not do what I hoped it would, it did lead to some imaginary thinking before 9am.
Posted by fun as a gran at 19:21