Do children learn their times tables?

Last night the children we here for their usual weekly sleepover, and as ours up here and back at school ( or in Bobs case started school) then he was popped to bed at 6.30, had his bedtime story and as it was too early for Fifi and they share the same room here, then we toddled off downstairs to play games.

Decided we would play something different as we did not have Bob to consider and got out daughter No1's game of Yahtzee, its been gathering dust for a while now so it has. (see here if you not sure what Yahtzee is)

For those of you that have never played the quick synopsis is you throw 5 dice and have to achieve sets of each number and combinations of numbers on the dice. You then mark down the score on a score pad, add them up and the highest score wins.

Well how silly of me not to realise that a bright child who is now in Primary 5(ages 8-9 yrs) does not know her times tables!! You have thrown say 4 dice with a 2 on, so you mark down 8 on your sheet (2*4). Well she could not do it like that in her head, she started at 2 and added on the next 2 etc. I was amazed, and said to her do you not know your tables and she said no she does not. She had 3 6's and did not know the answer, so I suggested she did 6 3's instead but no she could not see that they were the same sum. I remember my son struggling with this concept in Primary 1, ok it was adding up with him, and it took him till the end of P1 to grasp that, though his wee friend grasped it straight away, but any 2 numbers reversed equal the same answer at this level.

Guess we are going to need to play this game an awful lot more. 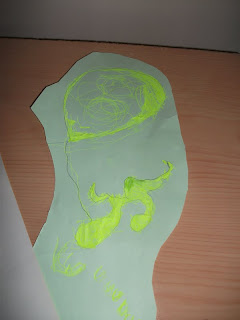 Here is a picture Bob drew for me....its Bob the builder (at the bottom) flying a kite (at the top). He even managed to write his name properly, even and the right way round ( I covered his name up so it can't be read). Its now up in the art gallery,,,,well ok its blue tacked to the bedroom,wall with a load of other pics....but it's our art gallery and we are proud of it. 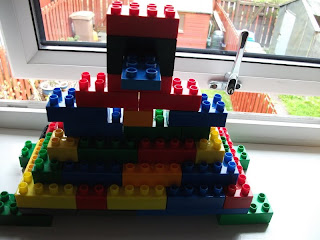 and lastly Fifi amused herself building a pyramid (with extra bits I'm told) out of duplo, she says she has been trying to build one out of Lego at school but always runs out of time and they have to break up their models before they put them away, would have thought this was a bit demoralising for them. We don't have Lego in the house, use to when our own children were little, and maybe will need to see about getting some for her.