OK following on from Kays posting over on her blog brinkofbedlam, she wanted somebody to try her recipe with coke instead of sprite, so as I had bought a chicken I thought why not give it a go. 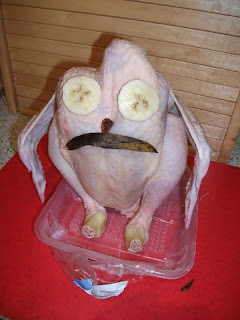 Was going to leave this till I got my spices that Kay had use from Healthy Supplies but as I had opened my chicken on the early hours of Thursday morning to enter the 24 hr photo comp at Photobox over on face book,the theme at 5am was "make them laugh" for that hr so as Kay's pic had made me laugh, I thought why not!! I put it in with the caption "we are all feeling foul by now" I dint win, some other non funny picture did but that's the way it goes.

I didn't want to leave it uncovered in the fridge until then so I thought I would rake my cupboard and use some of the flavourings I had.


So I took my chicken, mixed some oil (dont use butter in this house as Kay did) with some mixed spices and stood said chicken on top of my half can of coke. The other half went in with a gammon joint I had also bought.

Now I did not put the chicken in the oven till gone 5pm, as we had been busy falling out over trying to make a video for the Appliances Online video review competition, hubby suddenly turned into Stephen Spielberg and wasn't happen with this film star in the making!!

So it was gone 7 before the tea was cooked, by which time I had a splitting headache, was knackered from joining in with the photo comp most hrs of the night, and really not in the right frame of mind to be taking a photo before we ate, so here is the cooked photo. As Kay said it was very awkward to get off the can, but I found if I cut the breasts of first I could then lift the chicken and use a knife to push the can out carefully.

Result -   the chicken was very moist, and very pleasant to eat, with no taste of coke available at all. Would certainly not hesitate in making it again.

Out of curiosity I poured what was left in the can into a glass to see what we had in the can. Funnily enough it had gone clear with a settling of dark stuff on the bottom, I left it to cool to see whether it had any grease out of the chicken in the can but it didnt seem to.

The gammon joint was cooked up at the same time, have tried a slice of it, and it was beautifully sweet, very moist and a joy to eat. I did it in a casserole dish with a lid on so it didn't go to crispy.

Email ThisBlogThis!Share to TwitterShare to FacebookShare to Pinterest
Labels: chicken a la can of coke, gammon in coke, recipe