Seems every week lately when I have the grandchildren that Bob has a new thing in his medicine bag. He has gone from a full face mask spacer to one he has to breath into and out off. He has struggled up until now with "deep breath in" this usually resulted in exhaling, but he seems to have grasped the concept in the last month. Can we quite comical when we try deep breath out, hold it, spacer in mouth and then breath in....doesn't always happen in quite that order but never mind.

He also has a new machine to help build up his lung capacity and strength, which needs ten breaths in and out morning and night....usually manages to count to ten with his fingers, first one hand and then the other.

Whilst we were doing medicines tonight Fifi was trying to plait her own hair, then thought  it would be easier to try with my hair instead, but decided mine was too soft and wouldn't work as well. 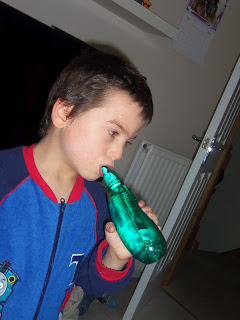 Tonight for stories we read Splat the cat cos the kids think its funny when I read out "cat school" as it comes out as "scat school" every time, just the way the sentence is written.

We also had another favourite The gobble gobble mooooo tractor book, well anything with tractors in has to be a favourite and this has lots of noises he  shouts reads out, not to mention the big 4 page fold out spread.

I have tormented Fifi that her scratched tummy (her kitten scratched her) was going to be picture of the day and she was not too amused.
Posted by fun as a gran at 22:22

Email ThisBlogThis!Share to TwitterShare to FacebookShare to Pinterest
Labels: 170/366, Project 366