I have used rechargeable batteries for years and years, when the children were young toys usually required batteries and for although the initial outlay may seem expensive in the long run they are very very economical.

My daughters favourite product was a tape recorder she got for her Christmas along with a set of Story Teller books and tapes when she was four. I was not keen on a four yr old plugging into the mains when she wanted to use it and so we bought her rechargeable's to go with it.


Now there is a new breed of rechargeable batteries out, the Sanyo Eneloop battery. We have been using these for a while now. Their main use for us is in digital cameras, especially the emergency camera that stays in the car all the time.
These  battery may remain up to 70% charged if not used for up to 5 years (or 90% charged after 1 year), handy if you are ever involved in a bump to take photographs of both your damage and the other persons. But the camera is not much use if when you go to use it the batteries have run down.
I really am impressed with these batteries, in use they dont take quite as many pictures as a good high quality set of name brand would, but run a very very close second.

I find they run for longer than my current rechargeables when used in my personal digital radio that I use for maybe eight hours a day during the week, it masks the tinnitus!!

So what are the benefits of eneloops?

They are very planet friendly, 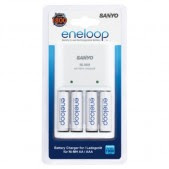 In Europe 90.000 tons of batteries end up in the household waste stream. eneloop helps to reduce this amount significantly as it can be recharged up to 1800 times. This means that one eneloop saves the garbage of 1799 disposable batteries. The easiest way to avoid any damage to the environment is to avoid any garbage. A product, which is not produced, packaged and transported, cannot damage the environment.
x

The eneloop batteries are pre-charged in Japan by “green power” from photovoltaic generation. This means that a part of the electric power used for manufacturing (the amount equivalent used for factory pre-charging) is generated using clean, renewable solar energy.
x

Used materials in the eneloop produce less pollution when disposed

With our eneloop rechargeable batteries we replaced the heavy metal cadmium of the Ni-MH cell with more environmentally friendly metal hydride and refrained entirely from mercury used in alkaline batteries. This means if your eneloop goes after using it 1800 times in the recycling bin it will even at this stage be less polluting than a disposable battery.
x

Rechargablebatteries tells you on their site why people should be using rechargeable batteries;

Choosing rechargeable over disposable may seem like a simple thing but it does make a difference. Each person that makes the switch saves energy and reduces the effects they have on the planet. Alone, it may be a small impact but when you have thousands of people switching, it can add up to be a huge difference. Isn't it time you made the switch?

This is a review post and I was supplied with a battery charger and a selection of batteries, but this post is an honest reflection of my findings.