Bobs first venture out with the camera

I know Bob is seven and a lot of children his age have grown up with a camera in their hand, but Bob has never used a camera before, he plays with his sisters tablet that takes pictures but only messes around in the house with it.

So tonight as his sister was swimming, yet again says Bob, Bob wanted to stay here rather than go and get bored watching. So I decided now was a good time to take him and let him loose with the camera. We took most of our pictures in landscape but we also learnt how to use portrait, we learnt how to zoom in and out and we even used macro for a few pictures, though I switched this on for him, we will leave that for another day. The very first lesson he was taught was putting the wrist strap round your wrist and tightening it up, I changed the none tightening strap for one off the wii so it does tighten ( and then ordered a new wii one to replace the one I used)

The sun was not out, it was dull and overcast, so the light was not brilliant, no nice reflection in the water or light bouncing off the buildings, but today was not about quality it was about fun and learning.

So here are a selection of the pictures Bob took, a few of them were cropped and a few lightened but apart from that they are all his own work.


Bob loves tractors and trailers, so he was in his element


and lastly he got a picture of grandma taking a picture. 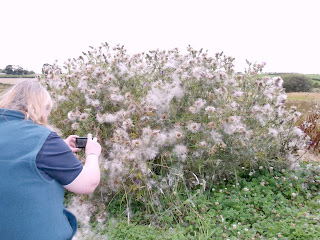 Not bad for a first attempt. We will see what we can do next time.
Posted by fun as a gran at 21:12