I was offered the chance to try out this new snack from Walkers, now I have to say personally I would rather have a pack of crisps to a sweetie so after popping across to their website to read  more about them, I thought yes please would love to try them.


So what are Mighty Lights?

With 30% less fat than standard crisps, Mighty Lights are perfect for kids' lunchboxes. They are tasty, ridged crisps that come in three flavours - roast chicken, cheese and onion and lightly salted. All the flavours are suitable for vegetarians, and are available in shops nationwide. They're made from real potatoes with no artificial colours of preservatives-  and they're a source of fibre.

So this week we received a six pack of each of the three flavours to try.

First off I tried the chicken ones,  These contain a third a 1-3 year old child's and a quarter of  a 4-6 yr olds salt intake for the day, but personally I would give a young child half a bag rather than a full one.
The crisps were a nice texture with a good amount of flavouring, not too overpowering as some crisps can be. There was no nasty after taste and I would buy theses again.

I had a worrying concern with these was on the web site the allergy advise tells you they contain wheat in the chicken seasoning  but there is no mention of this on the bags, so for anybody with an allergy to wheat this could be dangerous. The website allergy advise makes no mention of being made in a factory that contains milk, where as the bag does. For some of us correct allergy advise is essential. I did phone Walkers and spoke to them about this and somebody was going to get back to me but so far has not.

Walkers have got back to me on these  issues. The gluten contained in the small amount of wheat in the flavouring puts this product below the legal guidelines that company's adhere to. These guidelines are set to protect the public and have been lowered in the last few years.
I am also informed that for all it is made in a factory that contains other possible allergen ingredients the machines are very very thoroughly leaned down in between flavours and therefore pose no threat to customers. Walkers thanked me for bringing this to their attention and appreciate how important allergen information is.
Seems I was over reacting, but when my under reacting I may be endangering my grandsons life then better to query than take the chance.
Thank you Walkers for the information and putting my  mind at rest.

Next off we tried the Cheese and onion flavour. These again provided a nice crunch, have a nice texture and are a good thickness. These were not overpowering and also had no nasty after taste. These I would also buy again.

I used these the other night in a recipe.

I made macaroni cheese, put it into an over proof dish and topped with sliced tomatoes. I broke up a packet of crisps with a rolling pin and mixed the crushed crisps with grated cheese and sprinkled it across the tomatoes and burnt it browned it under the grill. Serve while still warm. 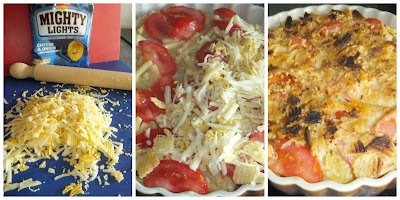 Lastly I tried the lightly salted ones.  The same nice texture, same crunch. but if they made these in a salt and vinegar flavour then I would have said these were in the wrong packet, they had that horrible nip that leaves wee blisters on the end of your tongue to me says salt and vinegar. Both my husband or myself  found these nippy and I would not buy them again.

The allergy advise on these also differs from the website to what is on the bag. The bag tells you they were made in a factory that handles milk, but the website does not mention milk. This has also been queried. As soon as I have more information from Walkers on these issues I will update and let you know.

Walkers have phoned me back to say they are still trying to find out the correct information and hopes to get back to me at the start of next week. will update you when I have any more information.


Disclaimer I was sent the crisps to sample and will also receive a payment.
Posted by fun as a gran at 21:51