We were sent out a Mattel Hot Wheels Triple Track Twister Trackset to test out and see what we thought.

This is quite a modern take on an age old and loved product, you can attach an iPad to enhance the play.

So what is this track all about?


It’s multi-car amped-up action like never before! This Hot Wheels track set has triple the fun with three tracks - creating three different loops - with two power boosters, and one ultimate crash zone! It’s open-ended play with endless possibilities, plus a digital opportunity to really bring the track to life through augmented reality!

Place an iPad (sold separately) into the removable stand at the base of the set, and download the free Hot Wheels Action Capture app to battle sharks, robots and more in a variety of different worlds. It’s absolutely twisted fun!

Enhanced Play With Cutting-Edge Technology
The set comes with an attachable iPad stand and new glyph technology, which lets boys use their iPad (not included) to race through five virtual worlds — Team Hot Wheels®, Shark Park, Farm, Dinosaur, and Robot Battle. Just download the free Hot Wheels Powerport app and attach your iPad to the set. The app interacts with the track to make both worlds collide in vivid virtual reality! Kids can even record and play back video of their car in action!

So what did we think?

The set up took me about 20 mins, wasn't the easiest to start as I did not find the instructions the clearest, but once I realised that each of the pieces had letters stamped on them it was easy enough. I also assembled the iPad stand, but didn't need this as we do not have an iPad but I could not work out how to disassemble this piece.

The track once set up is very sturdy, takes a fair amount of rough playing and is easy to move from room to room without it falling to pieces.

Very simple to operate, you need to add 4 D size batteries, switch it on and put a car onto the track. The cars are sent round the track by the power boosters and you have the choice of which of the three tracks it goes round simply by moving the red and blue levers. The set only comes with one car but we used another one we had here and the children had great fun racing and chasing and crashing into each other. By them operating the different levers they could make the cars crash or prevent them from crashing by their action. 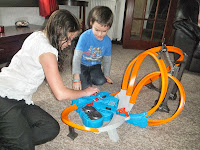 Sadly between us we do not own an iPad so we could not test out the app and see the enhancement it would brings to the fun.

Our verdict, the children had great fun and they think Santa should add it to his present pile for boys and girls this Christmas.


You do need to be careful that the cars are put on the track flat when you are pushing them through the booster else they will go flying off the track. .

Visit www.teamhotwheels.co.uk for even more Hot Wheels driving adventures
Posted by fun as a gran at 14:51