Another sad day has come, a day any pet owning family dreads, the day a valuable member of your family passes away. Three generations have loved her and interacted with her and all of us have shed a tear over her this week.

Dipsy cat has been in the family for seventeen years. She came into our life one night, hubby went to pick up daughter No2 (L) from a school disco, less than a ten minute trip in the car, but during that trip daughter had twisted OH round her little finger  she had that habit  and they had decided to take on this six month old kitten. We had had two cats that were also L's,  Askit and Scoobie, but Askit had disappeared a few months before hand, he just never came back, we put up posters, we asked about we hunted and searched but no luck, would have been nice to think he had found a new home but he was not that sort of cat, he never wandered far unlike his sister, she had about fifteen homes she visited and ate in.

Anyway this little kitten came into our life. Not long after that L went to work away from home and then went off to university, so daughter No3 (H)  really became Dipsys's best friend.  Dipsy always preferred children to adults. You would always find the two of them together, Dipsy always had the pillow on the bed, for a small cat she took up an awful lot of room, and poor H would be found lying at the bottom of her bed.

L came back from university, by which time H was living with her birth mum, and so the affection and the bed sharing moved back to H, Dipsy never had the same relationship with the boys but had a great bond with OH, they would meow at each other and she purred her head off any time he was around. 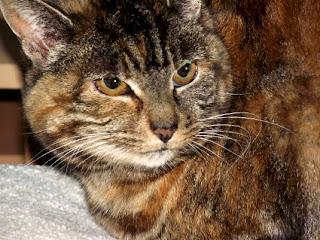 We were lucky we always live quite rural and the cat was always out doing what cats did best, keeping the population of birds and mice down.  Her and Shorty Dog had a proper love hate relationship, they both gave as good as they got but the cat use to creep around the house looking round doorways and such like before she entered a room. Having said that you would find the two of them lying near to each other, both facing away so they were not actually looking at each other, in a patch of sunshine anywhere in the house, they knew how to find it and move from room to room as the sun moved.

Just over six years ago  Daughter No1 (S) and the grandchildren came for a two week holiday, and ended up staying for nine months. Dipsy cat at this point got very very attached to Fifi and Fifi to Dipsy. The two of them became best buddies and Dipsy then moved on to sleeping on Fifi's pillow and she had to sleep shunted down the bed.

When S eventually moved back out it seemed such a shame to split Fifi and Dipsy up. We lived on a farm at the time and the house my daughter moved into was visible from the farm, a mere four fields away and we had a feeling the cat may just come back, but no she was that attached to Fifi she stayed. So for the last six years Dipsy has been Fifi's cat.

On Sunday evening just after 8pm S phoned to say Dipsy was really really not well, could not stand and was looking at her pitifully. So she phoned the vet, we went to pick up Dipsy and Fifi broke her little heart as she said goodbye to her. The vet did check her all over and agreed that it was her time. She drifted peacefully off to sleep.

RIP Dipsy cat. you had a great life, and brought a great deal of pleasure to three generations.

Both the children wrote her a goodbye note, Bobs read I miss you love Bob with lots of hearts and kisses. 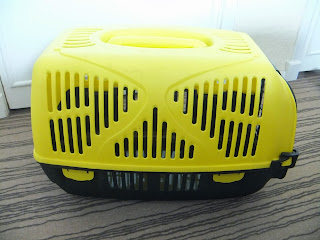