We were privileged enough to be asked to try out Spy Gear from Spin Master Toys and we have been having some fun with it,

We were sent a mic launcher - The Spike Mic Launcher delivers super spy audio surveillance. The special dart has a built in listening device. Just fire, stick and listen. With a live audio feed, you can hear conversations happening in far away locations.

We used this to spy on granddad in the loft. 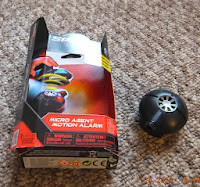 A motion alarm - Set a trap for snoops and thieves by planting this motion alarm behind a door or in your personal gear. Movement triggers the alarm, so you can catch intruders red-handed!

The kids have had great fun with this on the stairs and across the back door. 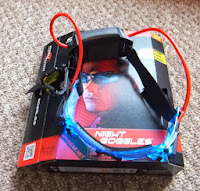 Some night vision goggles - Wear these special spy glasses to see everything in the dark!
Bob thought these were brilliant, out in the garden, the shed and turning the lights off and coming down the stairs. 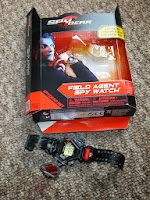 An 8 in 1 Spy watch -
This cool watch has 8 functions that every mini spy has to have!
- world clock
- timer and alarm
- motion detector
- torch
- secret message descrambler
- special spy paper
- capsules for storing secret messages 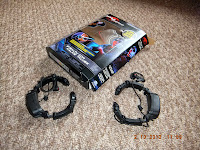 Bob has not quite grasped these, he still shouts loud enough for you to hear him at the other end of the village. But once we got him to talk normally he had plenty of fun round the garden, playing hide and seek etc. 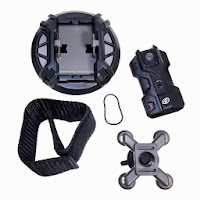 Roll the Panosphere into any room and capture amazing 360° panoramic video. You’ll never miss a shot! The included suction cup tripod and the Velcro band let you place the Panosphere in secret locations to record the entire environment.

Bob had great fun with this in the garden taking videos. He wore it on his wrist with the strap.

We used it on the stand it has to spy on granndad in the loft. The only disadvantage is if you want it to be 360 o then you have to turn it manually it is not automatic.

It was easy to download the videos onto the computer, simply just plug it in and download.

Th only gadgets to come with batteries is the Spy Cam and the watch,  but the rest take AA batteries so are easy to get batteries for.

We had lots of fun with our set. The children have been booby trapping the house with the alarm and sneaking round filming us.

We set them up a mission. We made up clues and got Bob to hide them, you can see this in the first video, and then Fifi had to solve "Mission Impossible". Did she succeed? Watch the second video and see.

Over all the children had fun with the items, but I think the lower age range of 6 is possibly a bit low, I think 8 may be better.
Posted by fun as a gran at 21:07