On the way back from Glasgow last week we decided to stop off and have a look round Whitelee Windfarm  I have never been to a Windfarm before but found it a very interesting experience.

The windfarm became fully operational in 2009 the windfarm producing clean, green energy. Ten years in the making, Whitelee has been carefully planned and designed to work in harmony with the existing environment and is home to a 25 square kilometre area of habitat management, one of the largest in the UK.  Species such as merlin and black grouse can be spotted at Whitelee. 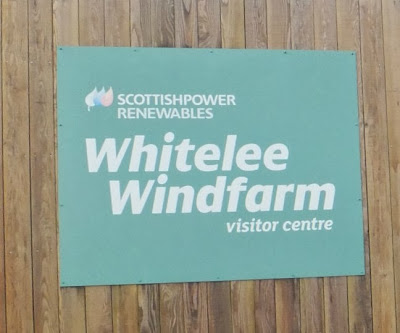 Whitelee Windfarm is the UK's largest onshore windfarm. It is located on Eaglesham Moor just 20 minutes from central Glasgow. The windfarm has 215 turbines which can generate 539MW of electricity, enough to power just under 300,000 homes*.You can access the windfarm for free and experience the wind turbines up close with over 130kms of trails to explore.

First off all we had a look around outside. There were posters telling you about the building itself and the wildlife that you can see on the moor itself. 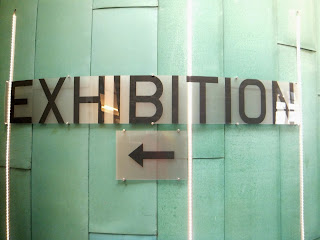 The Visitor Centre is also free and has an interactive exhibition and a Cafe to relax after the long walk on the windfarm.

The Exhibition has fantastic hands-on interactive activities. If you were building a windfarm would you know where to place the turbines? Would you know how many blades to give them? Would you be able to balance the country’s energy supply to meet electricity demands? Investigate this and much more!

We played with the interactive exhibitions, we managed to get the five lights lit but was sore on the writs.

Making your own power with the interactive turbines was fun, we kept changing which ones we used and how hard the wind was blowing, have to say this was a lot of fun, and I spent quite a while playing with it.

After we had done the inside we went for a walk The weather was not the nicest, it for obvious reasons is on a very exposed area and the wind was quite strong.

We will need to take a trip back next year in the nicer weather and really enjoy the outdoor experience, take a picnic and a rucksack and make a day of it. I have to say we fancied the Blackwood Hill viewpoint.

Blackwood Hill Viewpoint is situated approximately 2.5km (1.5 miles) from the Visitor Centre and has views for over 80 miles of countryside on a clear day with Ben Lomond, Ailsa Craig and Arran all visible on even hazy days. A large bronze toposcope is the centrepiece of the viewpoint. The toposcope itself is said to be one of the most detailed in the UK, bringing attention to features within areas such as Loch Lomond and Trossachs National Park, the Ayrshire coast and into the Clyde Valley. 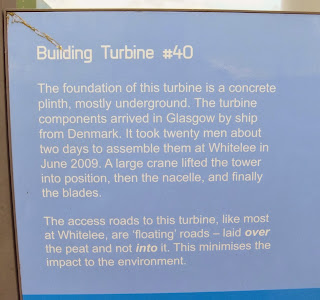 There are a lot of interesting facts and figures on signs attached to the turbines. But have to say they make you rather dizzy staring up at them, just the combination of the turbines moving as well as the clouds scurrying by at high speed.

Whitelee has over 130kms of tracks to explore so there’s no excuse not to get out and about! The windfarm offers a unique and varied setting
for many recreational activities and outdoor pursuits including walking, cycling and horse riding. Across the wider area, forest roads and trails provide increased access and future developments will see these trails upgraded and improved.

Did you know that Whitelee Windfarm has its own Countryside Ranger Service? Throughout 2013 they will be hosting a series of fantastic FREE events

In a strange sort of way the windfarm is actually very beautiful, the turbines just stretch for ever. I found the whole area very peaceful. I was surprised just how quiet the area is and even up close to the turbines they are surprisingly quiet, and even stood underneath them you could hold a conversation at a normal volume, no need to shout.

I also uploaded other pictures and made a google+ album if you would like a look.
Posted by fun as a gran at 22:11